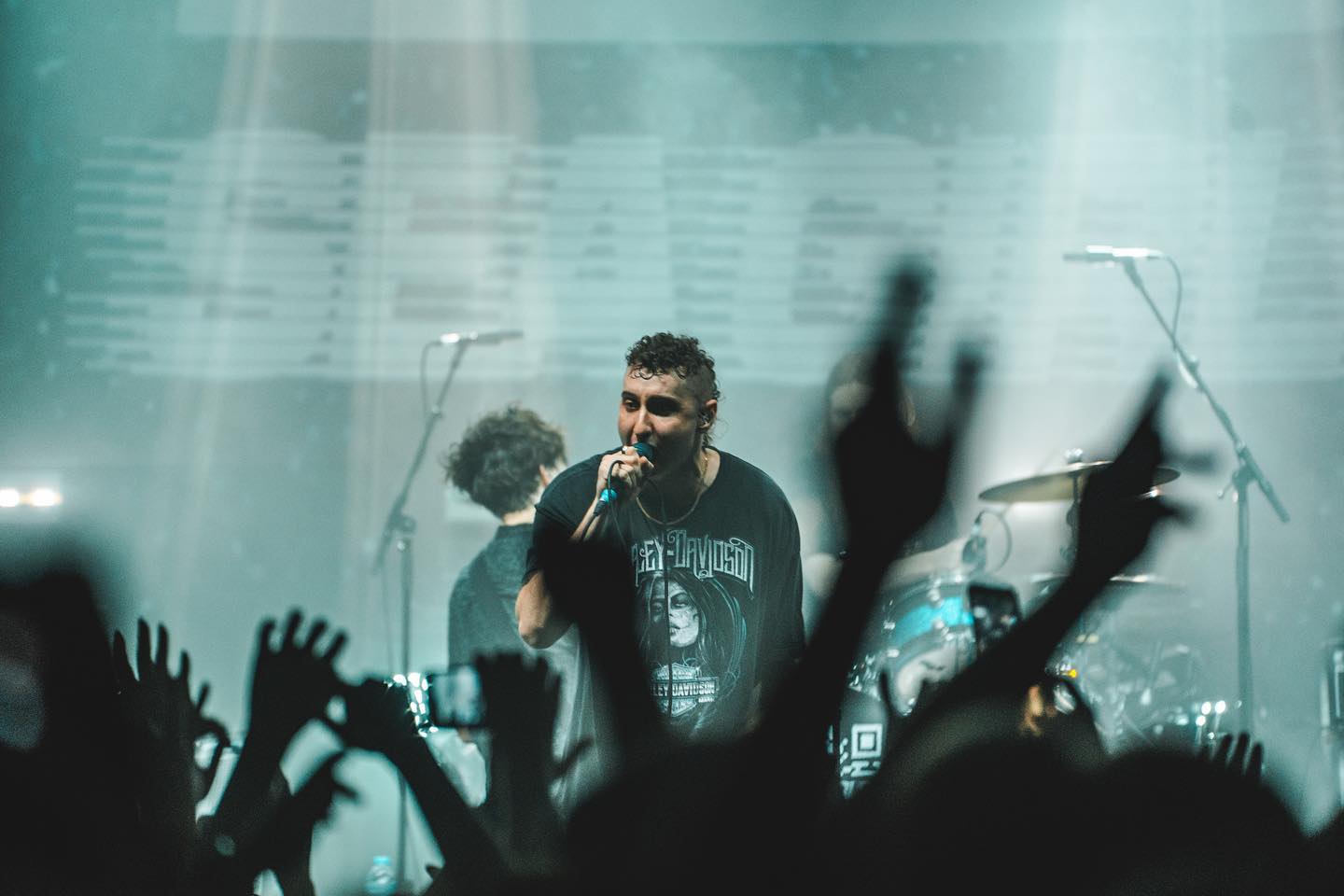 Written by Victoria Wilson
Published at 19:00 on 13 October 2021
Images by @SeaGirls on Facebook

After seeing Sea Girls this summer at Neighbourhood Weekender festival, my expectations were set as high as the final note in ‘Forever’, and the anthemic indie rock band did not disappoint. With dynamic hits from their 2020 debut album Open Up Your Head embellished with fan favourite classics and some unreleased gems, Sea Girls put on and pulled off a roof-raising, hair-raising performance, above all raising anticipation for their 2022 album, Homesick.

Against the grand architecture of the O2 Institute, supporting act Coach Party kicked the evening off with a bang – or rather with an infectious collection of high energy indie rock bangers. The four-piece band from the Isle of Wight seemed as fascinated with the two-pint cups the audience were enjoying drinks from, as the audience were with their vibrant performance. A highlight of the set was the bands newly released single ‘FLAG (Feel Like A Girl)’ which mixes pacy electric guitar riffs and a catchy drum beat with stunning vocals from lead singer Jess Eastwood, flicking from soft ballad-like runs to bolder rock tones which had the whole audience clapping along. With a cover of Lizzo’s ‘Truth Hurts’, Coach Party set their sights high; they had big shoes to fill yet executed the song perfectly in a unique rock style, reimagining the renowned dance tune. The audience sang along enthusiastically, creating an ecstatic atmosphere ready for Sea Girls performance.

Excitement bubbled through the crowd, which resembled a sea of Sea Girls merchandise, in the short break before the band performed. By scanning the QR code on the sparkly blue Sea Girls drum kit, we were thrilled to enter a competition to win lead singer Henry’s guitar. As the arena was submerged in darkness, tensions climaxed. The Sea Girls logo was illuminated as the opening chords to ‘Call Me Out’ rang out and the band ran on stage to rapturous applause. This dynamic opener showcased the talents of the whole band, with a strikingly energetic guitar solo by Rory Young, whose jumps and hair flips kept the audience dancing to the snappy beats of Andrew Noswad (bass) and Oli Khan (drums). The band proceeded to rock and roll out hit tunes from their 2020 album Open Up Your Head, such as: ‘Closer’, ‘Ready for More’, ‘Lie to Me’, ‘Forever’, ‘Transplant’, and the fan favourite ‘All I Want To Hear You Say’. There was a sense of unity in the crowd as we shouted the final line of the chorus to ‘Violet’ together, a tune we couldn’t stop singing the whole journey home.

After jumping and singing to these classic Open Up Your Head indie-rock anthems, the show took an emotional turn as we were treated to unreleased yet nostalgic songs ‘Home Town’ and ‘Lonely.’ This set the bar high for the band’s upcoming album. If these teaser songs are anything to go by, we will certainly be back watching Sea Girls and ready for more following the release of Homesick in January 2022. The set then whirled from new music to older 2018 classics, ‘Heavenly War’ and ‘Too Much Fun’ – a tribute to long-term Sea Girls fans. This was was interspersed with a tribute to our city through a beautiful stripped back cover segment of ‘War Pigs’ by Birmingham’s heavy metal legends Black Sabbath.

A highlight of the show was the bands’ performance of ‘Do You Really Wanna Know.’ The lighting matched the crowds’ energy perfectly, springing to life in a cloak of rainbow colours as lead singer Henry Camamile hit the chorus with fiery power. Camamile continued to raise the roof in ‘Damage Done’ as he stood on the barrier reaching out into the crowd and high fiving fans through the iconic ‘no, I don’t really wanna dance’ sequence leading into the chorus.