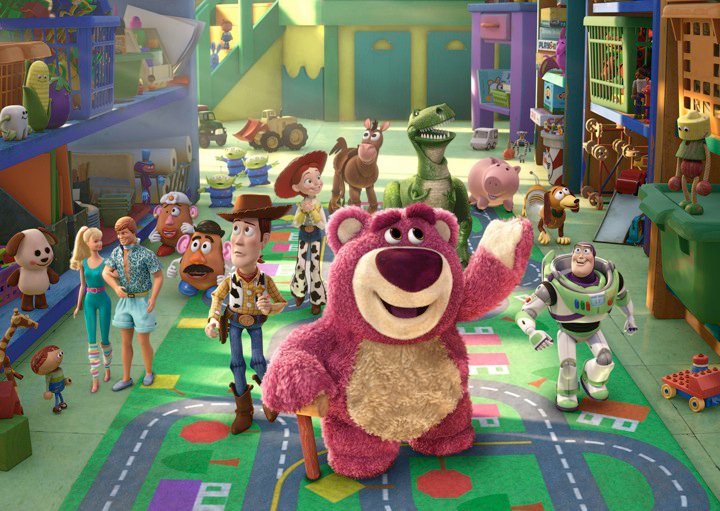 Pixar: A Decade in Review

The third edition of a film series can have catastrophic effects, take Shrek the Third for example, but Toy Story 3 managed to improve on its predecessors. Released fourteen years after the first film, Pixar massively developed their animation styles, so the third film boasts wonderful animation. One of my favourite examples of this is the nursery scene which we see from the toys’ perspective, including a toddler licking the screen. Despite the improved visuals, Toy Story 3 retains the emotional core of the first  Toy Story.

The film is overflowing with humour that all the family can engage with, such as Buzz’s Spanish mode or the aliens’ iconic ‘claw’, and Ken’s closet scene. Alongside Ken, Toy Story 3 brought multiple other intriguing new characters. Lotso is an excellent antagonist, as you end up despising his strawberry-smelling sweet façade but can’t help to sympathise with his backstory. Unfortunately, this perfect twist villain began Disney’s overuse of the trope in the 2010s.

Alongside the laughs and smiles, there is a plethora of heart-wrenching scenes. I must admit that I’ve never made it through the final scene without tearing up as we see Andy pass his beloved toys onto Bonnie. Now in university, this scene holds even more emotional resonance. Whether you liked Toy Story 4 or not, the third film provided a poignant comment on the importance of growing up and moving on for both its child and adult viewers. Inside Out is a Pixar film that practically screams the studio’s talent. The director of Inside Out, Pete Docter, is responsible for other Pixar classics such as Up and Monsters Inc. It is no wonder the film is as fantastic as it is. Released in the midst of a slew of unnecessary sequels, Inside Out was essentially the needle in the haystack used to demonstrate Pixar’s unrelenting creativity in the face of the corporate overlord. Despite being made by Disney to churn out cash-grab sequels, Pixar continue to prove time and time again their ability to deliver something profoundly original and heartfelt.

Following Inside Out, Pixar fell again on to hard times with The Good Dinosaur and even more sequels to follow, practically establishing a new pattern. Inside Out is a pivotal movie as Pixar films have now been reduced to a minority of originals having to pass onto the torch against the darkness of sequels. Fortunately, Coco and Onward have kept this flame alive, and also (hopefully) Docter’s next film Soul.

Inside Out is a written masterpiece that both plays to and breaks out of Pixar’s conventions. Because it is a children’s film it is easy to fall backwards into simple visual spectacle and nostalgic glee, but then it slaps you in the face with its masterful storytelling and pedagogy. Not enough people realise but Inside Out falls into the line of tradition of morality plays. Like Everyman or Sandman, personifications of abstract concepts interact with each other in agreements, conflicts and reconciliations to say deep statements in simple, beautiful ways. Furthermore, the writing team spent extra time and effort in learning from psychology professors.

Most importantly, however, is that the film tells universal themes of childhood. Pixar is a studio that adores entertaining and teaching children while leaving us adults without something to cry about. In this morality drama about a young girl leaving her childhood behind to mature emotionally, the experience is so authentic and real and showered in love and purpose that you can even hear Docter cry in his director’s commentary. This passion behind Pixar is what keeps the studio improving its works even with the unnecessary pile of sequels.

Finding Dory was one of the most highly anticipated Pixar films of the last decade. Following the announcement in 2013 that loveable and forgetful Dory (voiced by Ellen DeGeneres) was to be the star of the sequel to Finding Nemo, the public had to impatiently wait another three years for the film to be released, 13 years after the original.

It was as wholesome as we had all expected it to be but also rather similar to the extremely popular Finding Nemo. There was the ocean wide search, accompanied, for a time, by some ‘turtley awesome dudes’, the soundtrack was just as soothing as the first and the film ended with an emotional family reunion. But, there were also some new faces added into the mix. Audiences were introduced to Hank, a grumpy seven-tentacled Octopus who acts as Dory’s guide in the aquarium, and whales Bailey and Destiny and all three became fan favourites and just as memorable as the characters in the fish tank from over a decade before.

A problem with a film being so anticipated, like Finding Dory was, is that it comes with so much expectation. The children that watched Finding Nemo when it was first released were all grown up when the sequel finally came to cinemas and it brought with it a fresh wave of nostalgia. The film had so much to live up to, especially 13 years after the undeniable success of Finding Nemo, a film that I imagine makes it onto a lot of people’s all-time favourites list. It was unlikely to become as beloved as the first film but, in my opinion, it was still incredibly enjoyable to watch, and the most successful of Pixar’s stream of sequels in the last decade – even if it did feel rather unoriginal at points.

But maybe that’s why it works so well. Because the plot is rather similar to Finding Nemo, it makes it so incredibly familiar to us.

Coco has been warming the hearts of adults and children alike since 2017 and goes down as an audience favourite of not only the 2010s, but Pixar’s entire repertoire. Its focus on the Day of the Dead is a respectful tribute to Mexican culture and acts as an educational experience for both children and adults alike who may be unfamiliar with the festival. This, in combination with a stellar soundtrack by Michael Giacchino, is what establishes this film as one of the highest rated Pixar films on Rotten Tomatoes.

One of the things that makes Coco so enchanting is its environmental immersion. The establishment of the streets of Mexico in the opening of the film delve into the rich culture that surrounds the Day of the Dead. The colour scheme of this environment is warm and welcoming, establishing it as the epicentre of life and vivacity in the narrative. The Land of the Dead, while beautifully vibrant in its own right, has a much cooler colour palette and lacks the same warmth as the Land of the Living. It is these subtle details that make the film as mesmerising as it is – no stone is left unturned and details are pursued to the fullest of the animators’ abilities.

The central characters of the film are so well written that we are entirely invested by their own unique journeys by the film’s end. Miguel’s infectious enthusiasm is felt at every moment in the narrative, his passion for music keeps the audience invested until he achieves his goal. We feel Hector’s desperation to be accepted from the moment that he appears on screen; his final moments, seen walking towards the Land of the Living with a newly gifted pair of shoes and tears brimming in his eyes, will never fail to leave a lump in my throat. The appearance of Frida Kahlo’s eccentric presence is a beautiful addition to the story, showcasing some of the best talent that Mexico has to offer, alongside an exceptional all-Latino cast.

Despite being targeted towards children, Coco is entertainment for the entire family. Its multi-layered humour and complex narrative surrounding grief and closure make it a tearjerker for anyone who dares to give it a watch. There won’t be a dry eye in the house – whether you’ve lost a loved one or not, it taps into all of your emotions.

The Incredibles upon release became Pixar’s second highest grossing film and set itself apart as a dynamic, comic superhero film where the heroes in question were ostensibly a normal, suburban family. The long-anticipated sequel, Incredibles 2, became Pixar’s highest grossing film of all time, and was released fourteen years after the first film, picking up where the suspenseful cliffhanger had left off, with the Parr family prepared to fight the Underminer.

The failure of the Parr family to defeat the Underminer becomes a segue into questions raised in the film about the usefulness of superheroes, the need for superheroes and whether they do more harm than good. It is the catalyst that leads to the decision to shut down the Superhero Relocation programme, having dire consequences on the Parr family’s financial support, pitting the Parrs against a world that has soured to them. Although set in 1962, the Parrs are confronted with an enemy unfamiliar to that of the supervillain Syndrome in the first film: technology, fronted by the elusive antagonist Screenslaver. The world explored onscreen is one of unimaginable progress not seen in the 1960s we know, creating a narrative where the traditional and the modern must co-exist, tensely.

Incredibles 2 follows in the footsteps of its predecessor but in a very dynamic and unforeseen way, exploring superheroes in their diminished form, out of touch with the technology the Screenslaver utilises, but still bold-faced to the end.

Looking for more animated movies to watch? Check out these reviews from Redbrick Film: