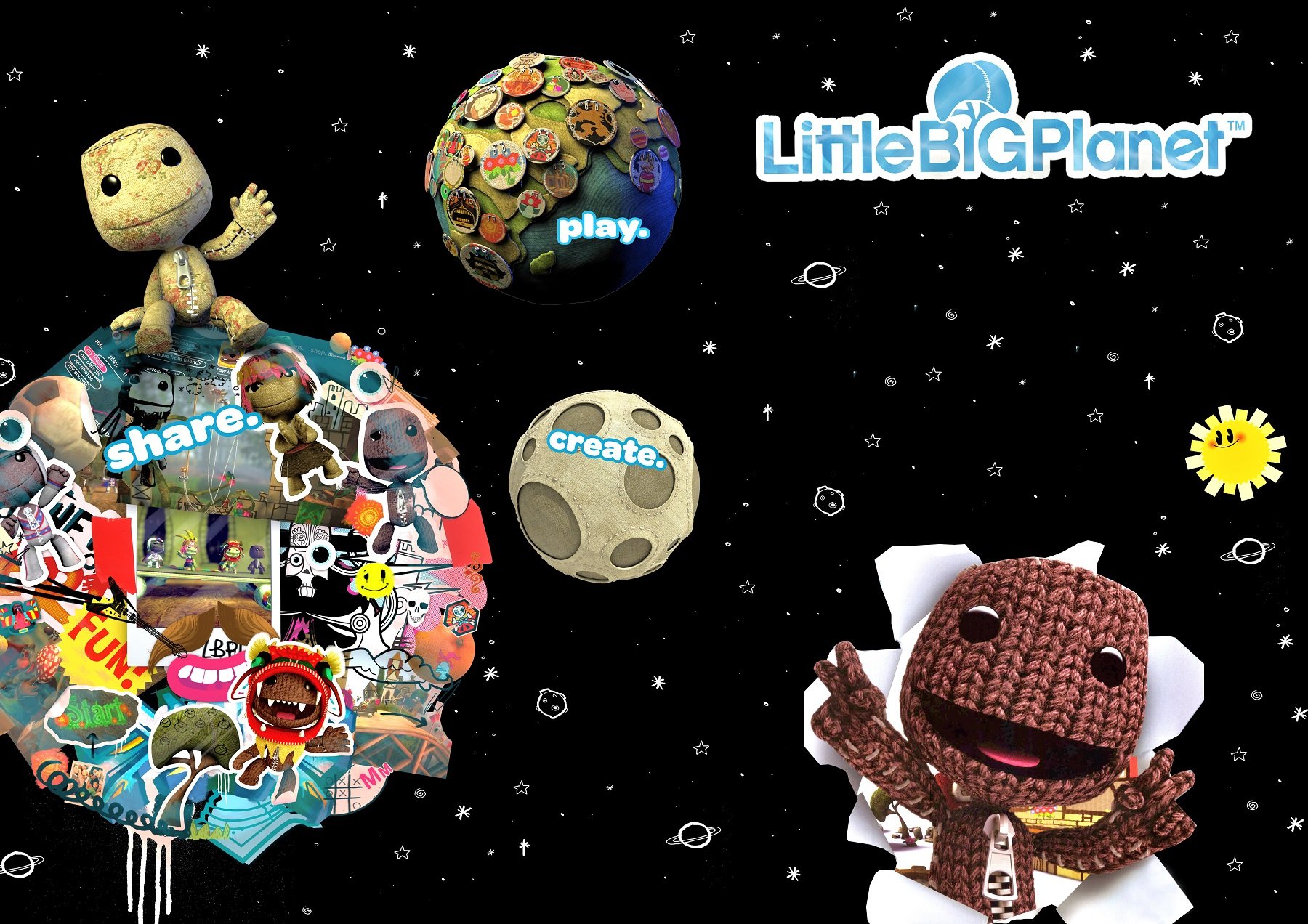 No three words better define my experience with the PlayStation 3 than ‘Play, Create, Share’. Originally a tagline for one of the console’s flagship series, the slogan quickly became its own brand before, just as quickly, descending into relative obscurity. Regardless, the concept of endless replayability and imagination was one that I, as a pre-teen, was utterly fascinated with. So how did this ‘Play, Create, Share’ movement begin – and why did it fall off so fast?

Its first mention was as the tagline for Media Molecule’s LittleBigPlanet, released in 2008. A pioneer of user-created content, the game embodied the three verbs to their fullest extent. LittleBigPlanet foremost offered a sizeable single player experience, bounding and running through various challenging stages in beautifully colourful environments. Crucially these levels were made with the tools offered in the game’s own Create Mode; fulfilling the second part of LittleBigPlanet’s mantra. I’ve written briefly about this mode before, but no amount of writing can do this wonderful, intuitive and imaginative portion of the game justice. The game delivers unlimited potential with its array of tools and customisable settings. The initial game didn’t stray too far from platforming adventures, but vehicles and survival challenges could be engineered with some inventive effort.

The ability to share these levels, either locally or with the world, was imperative to LittleBigPlanet’s success. A game with 55 single player levels soon became one with well over six million once connected to the internet. Hours of my time were dedicated to playing with friends to conquer some masterfully made challenges. Of course, LittleBigPlanet was not the first game to employ a focus on customisation, but it was certainly one of the most accessible and versatile.

E3 2009 saw a big announcement from then-Sony Computer Entertainment America CEO Jack Tretton – that the ‘Play, Create Share’ tagline was never just that, and it had instead evolved into its own video game genre. Sony, it seemed, were pioneering a brand-new type of game that provided even more creative freedom and agency than that of the sandbox genre before it. Thus, the next member of the ‘Play, Create, Share’ family was introduced to the world: ModNation Racers.

Released in 2010, ModNation Racers sought to match LittleBigPlanet’s accessibility and wealth of customisable tools, but for the kart-racing genre. Its vinyl aesthetic set it apart, while its highly intuitive approach to creating proved a worthy successor to LittleBigPlanet’s – in the track creation suite, for example, you could drive around an empty canvas as the course was constructed behind you. This, like LittleBigPlanet before it, was a user-friendly but surprisingly in-depth game that offered customisation that anybody could work. An inherent issue with the title, however, was that kart-racing was a more restrictive genre than platforming – once initial innovations had been made or tracks from other titles had been recreated, what new things were there to create? ModNation Racers’s concept was every bit as ambitious as that of LittleBigPlanet, yet the inherent limitations with its genre meant it had far less scope. It was clear that, in order to push the concept of ‘Play, Create, Share’ to the next level, its next title would have to possess transcendental qualities, acting as a platform for all kinds of creation.

2011 saw the release of LittleBigPlanet 2, widely regarded as the best in the franchise. Media Molecule proudly proclaimed you could make ‘anything you can imagine, from racing games and shooters to movies and music’ on the back of the game case – the all-encompassing package every LittleBigPlanet fan had been dreaming of. Obviously the means to create these types of games stemmed from LittleBigPlanet’s platform-focused engine – but with some work and initiative, it was entirely possible to create impressive levels in any number of genres.

LittleBigPlanet 2 offered a host of new objects, gizmos and materials to create with – but the largest innovation in the sequel was that of ‘logic’. This was basically LittleBigPlanet’s answer to coding; by stringing together multiple gadgets and connecting them throughout the stage, you could produce highly sophisticated devices and sequences within your levels. You could make the arena transform once the player has fulfilled a certain condition; create RPG-esque menus and shop systems; or even direct a film populated entirely by Sackpeople. The arrival of logic was what gave LittleBigPlanet 2 its versatile qualities and, even today, the refinement and finesse of some creators’ levels is extremely impressive.

LittleBigPlanet 2 appeared to be the pinnacle of what the series could achieve, having transcended its platforming roots and receiving updates for the next few years. PlayStation Vita versions of LittleBigPlanet and ModNation Racers would attempt to establish themselves as the ‘definitive’ versions of their respective franchises but, due to the Vita’s relatively low sales, they drifted off into obscurity.

The next few years would see confused progress for the ‘Play, Create, Share’ genre. In an odd move, March 2012 saw the announcement of LittleBigPlanet Karting, a game which promised to be ‘more than a ModNation Racers game starring Sackboy’. Admittedly, the game contained some new modes and the familiar look of the LittleBigPlanet UI – but nothing was achieved that couldn’t have been by a sequel to ModNation Racers. The implicit message was quite clear – that Sony had lost faith in the franchise, and that LittleBigPlanet was their best foot forward for whatever came next in ‘Play, Create, Share’. The game that would prove to be the genre’s swansong was LittleBigPlanet 3, releasing for both the PS3 and next-generation PS4. Most striking about its announcement at E3 2014 was that developer Media Molecule had handed the reigns to Sumo Digital for this third instalment. Though obvious disappointment followed, many could Media Molecule’s decision. The developers had been rather vocal about wanting to develop outside of the LittleBigPlanet series since the second game and having a fresh developer work on the third may combat any franchise fatigue Media Molecule were feeling.

Despite apprehension, however, initial gameplay looked promising; more space in every level, extended creation tools and the introduction of three new character types, all with defining characteristics and abilities, looked to reignite the snoozing Craftworld from its slumber. There looked like there was a lot to be excited for in this expansive, innovative and accessible title.

Many will agree that what doomed LittleBigPlanet 3 was buggy and lacking quality it was released in. Its story mode was short and lacked the replay value and charm of past games. Save data frequently corrupted, meaning hours of hard work could be lost seemingly at random, and playing online with friends (something the previous two titles prided themselves on) was almost an impossibility with the poor matchmaking and sporadic online system. Couple these problems with an overly ambitious arsenal of creative tools that left some casual players alienated and LittleBigPlanet 3 contributed towards the series’ dwindle as opposed to its resurgence. While the franchise has since lay dormant, original creators Media Molecule have been busy developing an all-new game creation tool, Dreams, which released last week. Time will tell whether it will champion accessibility, imagination and versatility as its predecessors did before it – but judging by projects conceived during its beta phase, there is nothing to worry about. Play, Create, Share lives on, and it will continue to do so while there are curators who wish to do all three.