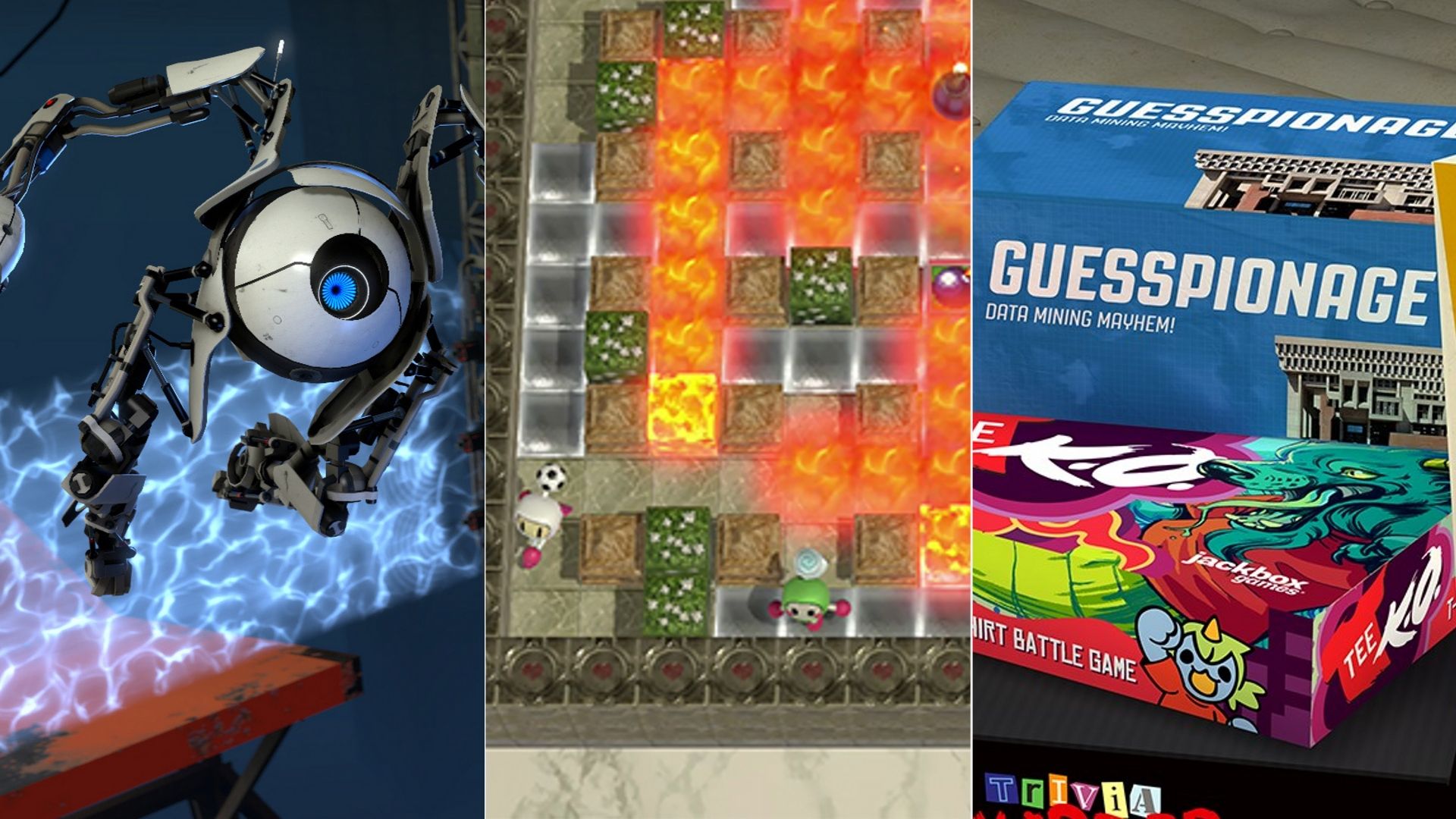 Gaming Editors and Writers Kieren, Tom and Alex give you their picks for the best party video games to play with your new flatmates/friends during your first year

Many of the suggested games will be great for four players to crowd around the living room. However, this is a slightly more outside the box, or more aptly outside the companion cube, pick in the form of Valve’s 2011 classic. Portal 2’s multiplayer, which debuted in this instalment of the puzzle series, is truly a blast and is everything you could wish for picking up with a friend and speeding through with a short but memorable experience.

The multiplayer is a separate campaign playing as two clumsy robots, Atlas and P-Body, solving various puzzles with the portal gun for the infamously sarcastic AI GLaDOS as her newest test subjects. Within that is one of the funniest and most satisfying co-op games you can get. All the puzzles are engaging and have a great natural progression using five sets of test chambers, as additional mechanics such as propulsion, repulsion and conversion gels introduced with clear examples and concepts. By the end of the multiplayer, when confronted with massive expanses with multiple rooms to work in, the large-scale doesn’t necessarily feel insurmountable. It’s a testament to the excellent puzzle design on display here. Whilst teamwork is required to succeed, Portal 2 is a game that embraces the natural chaos and cheekiness of cooperative play. Emotes and dances can be performed to annoy GLaDOS. You can cruelly place portals below your mates to doom your partner. Such evil behaviour does work with the comedic sensibilities of Portal 2 and makes it hard not to laugh in spite of it. Add this to GLaDOS’ usual dark humour and dry wit, and you get a multiplayer experience that is endlessly entertaining and a delight with anyone.

On top of all that, what also makes the game great to bond over beyond being so fundamentally well designed, but Portal 2 has the advantage of being cheap. The game costs just over £7 on steam for the full package and is available on PC and older consoles. Even for those with laptops focused for university study, Portal 2 can run on practically every computer and with full controller support. Regardless of how your mates play games, Portal 2 will have a way to support it. The PC version also has the advantage of custom maps made by players for those looking for additional levels to provide either a large challenge or maybe some more casually made levels.

Portal 2 truly shines as one of the few great puzzle multiplayer games. Many puzzlers create great single-player experiences, but Valve managed to find a way to master the challenges of multiplayer puzzle-making by making puzzles that require necessary cooperation, yet not let that necessity disrupt the central tenants of Portal 2. Pick it up and spend some time with a new housemate or a new friend. There is a guaranteed good time here.

What’s the best way to get to know someone during your first few weeks of university? *sweet as all hell samba jazz ensues* Everyone got their answers in? Oh, for God’s sake that’s disgusting, who wrote that?

What I believe earns the Jackbox games such a special place within our picks for freshers in particular is its accessibility to players who aren’t accustomed to video games! To play, all each player needs is a phone or some other web-enabled device to use as their controller. When you start a game, you’ll be given a unique room code on your screen. Just pull up Jackbox.tv on your device’s web browser and enter the room code to play along! The large majority of the games can be accommodate up to 8 players and any more people wanting to play along can join as audience members to influence the game’s outcome or just to heckle from the side-lines if you pick the wrong answer (Ok Karen, realistically how was I supposed to know ‘dasypygal’ actually meant ‘having hairy buttocks’? Honestly? It’s weirder that you do know).

The individual games and ‘Party Packs’ are almost eternally on sale in some way shape or form and are available for PC via the Epic Games Store or Steam – requiring next to no power to run so you can play it on whatever slab of plastic you saw doing a bang-up job as a doorstop in PC World – as well as range of consoles including PlayStation 4, PlayStation 3, Xbox One, Xbox 360 and the Nintendo Switch. So, there is no excuse not to try it!

Looking to break the ice? Try blowing it up. One frosty January night, I introduced my housemate to Super Bomberman 2 for the SNES. We haven’t played Mario Kart since. Bomberman is arguably the ultimate friendship game, in that if you both still like each other after this top-down battleground – then it is the ultimate friendship. It’s devilishly simple. Use the D-Pad to move around, press the A button to drop a bomb. That’s it. Sounds simple enough, no? That’s because Bomberman is the easiest multiplayer game to pick up and learn in the world. It takes about five seconds to drop your first bomb, see the four-directional blast radius, see that you’ve just taken out a whole block of wall, and suddenly you’re planning the many ways you can use this to your advantage.

The aim? Blow everyone else up – a tale as old as time. The four of you will be trapping each other into corners, weaving between blasts, running for dear life, all the while knowing that every bomb drop could be your last. It’s not easy for a game to make accidentally killing yourself fun, but as you watch your character stand between two bombs – one of them your friend’s, one of them your own – waiting for the three second fuse to count down before you’re blasted into oblivion, it’s impossible not to laugh at yourself.

Super Bomberman R is the newest iteration, released in 2017 for the series’ 33rd Anniversary, with a plethora of additions to make each match more interesting – more items, more battle modes, and the frankly mind-bending 8-Player matches. Whether you’re playing with a single housemate or a brand-new group of buddies, you cannot go wrong with a bit of Bomberman.

For even more ideas of what to play, check out these other articles!