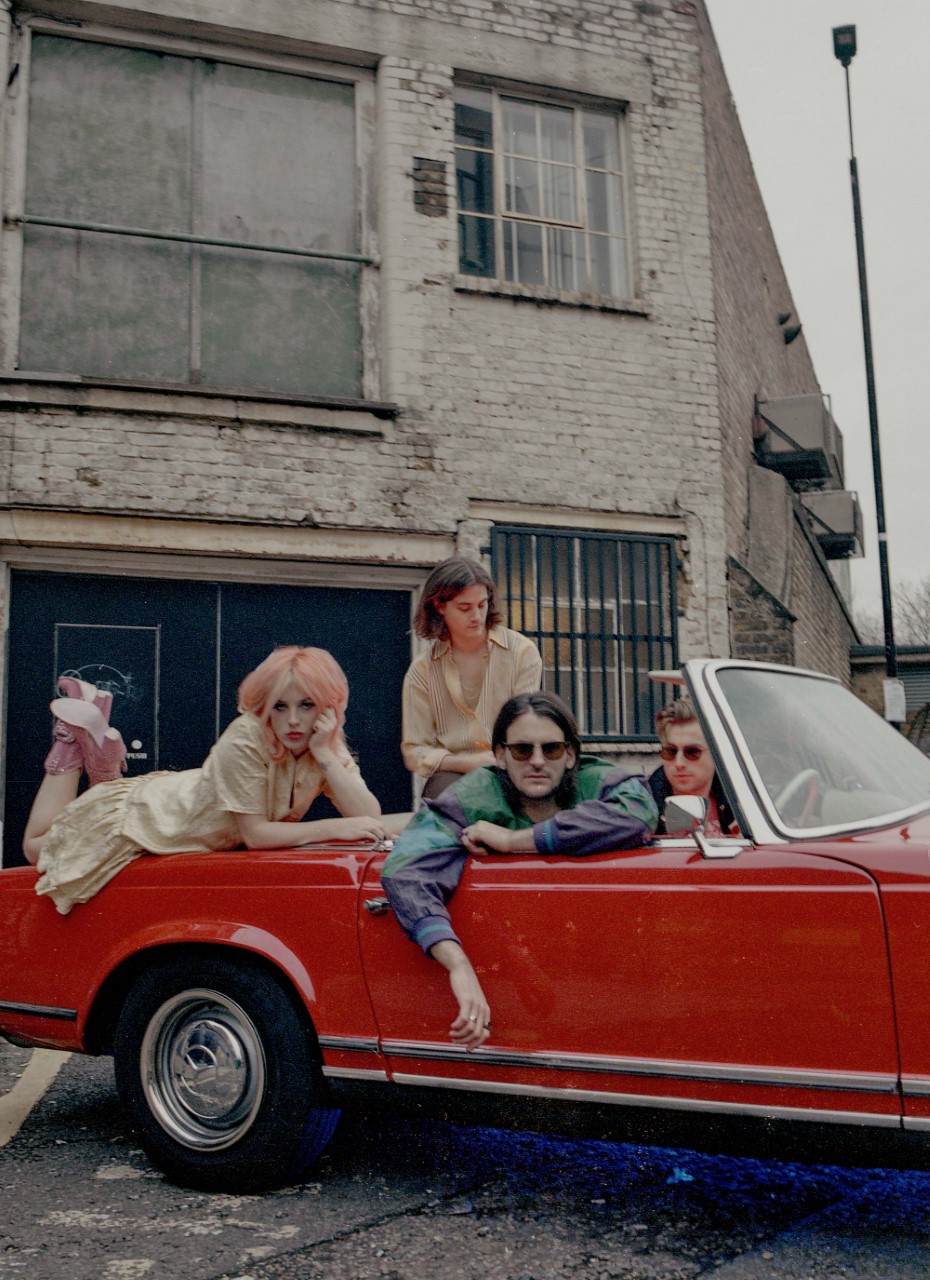 Music Critic Emma Walker catches up with Black Honey front-woman Izzy B. Phillips to discuss what to expect from upcoming album, Written & Directed, and what it is like to be in a band during a pandemic

Written by Emma Walker
Published at 16:00 on 27 October 2020
Images by Courtesy of Chuff Media

Having previously heard a few songs from their Top 40, self-titled debut album, I truly became taken by Black Honey after seeing their captivating set during Shimmer Sounds at The Mill late last year.  I caught up with Black Honey front-woman, Izzy B. Phillips, ahead of the release of their second album Written & Directed, where she gave an insight into what can be expected from the album, how the band’s creative and touring decisions have been affected by the pandemic, and her favourite small venue.

I just wanted to say thank you for taking your time to be interviewed by Redbrick and congratulations on completing Written & Directed. You’ve described your most recent single ‘Run for Cover’ as ‘Hives meets John Travolta.’ Is a mix of influences something we can expect from the album as a whole?

I think that is more specifically ‘Run for Cover,’ the rest of the record is pretty all over the place in terms of emotions and artistic narratives.  I wanted to honour my mental state to be honest with you, because I think I am the sort of person that is like one day, I’m feeling White Stripes-y, Hives-y homage, and then the next day I feel like I want to be Lou Reed and strut down the street in New York.  Those are all things that are part of me and part of how we made Black Honey.

That’s interesting, so obviously those are some of your inspirations.  I also love the inspirations of your music videos, very movie inspired.  So, when you were filming the music videos for ‘Beaches’ and ‘Run For Cover,’ how did the creative process differ, given the current restrictions?  Was it more difficult for you?

We did ‘Beaches’ completely in quarantine, so we had this whole thing where we were supposed to go and shoot in Ibiza in this motel, and that got completely scarpered.  So, we thought a fun, creative reaction would be to do a video filmed at home shot on social media filters, and that worked really well.  It took ages to do, and I have a new respect for people that self-direct and shoot, because just setting up a selfie-stick in a windy garden with a windy backdrop, and then after you’ve spent two hours doing all of your own hair and makeup, it takes a whole day to do one character each for me. And then editing it, I edited half the movie myself on iMovie, and then realised I couldn’t get the beats to line up as tightly as I wanted to.  So, then I decided to do the whole thing on Premiere Pro halfway through, so it took ages, but it was a really fun process and I think I learnt a lot in doing it.  I think it kept me busy during the quarantine, which is cool.  And then I guess ‘Run For Cover’ was more going back to our usual methods of cool location, cute narrative, but we definitely wanted to do a live performance video, and that was always in the pipes before even the quarantine.  But it just meant that when we were on the shoot on the day, we had to have masks on, and we had to be socially distanced, and I think we had like seven people in total on set.

Moving on from ‘Beaches’, obviously you did your original version and then you did your fan version of it. I can see based on that and your Instagram live the other day, that fan participation is quite a big thing for you.  So why is that so important to you?

I think artists aren’t anything without the people who listen to their music, that’s the obvious answer to that question.  But for me personally, I feel really lucky to be able to do what I do with my friends, and I don’t want anyone to feel like they’re alone.  If someone relates to our music, I want them to feel like they are part of it too, that they’re part of the process.

Definitely. You recently played at Signature Brew to celebrate DIY Magazine’s 100th issue, how did it compare to slightly bigger gigs that you’re used to playing?

I was really nervous about that to be honest, I thought, is it going to be really dry?  You have these really traumatic memories of when we were starting out, and playing to like, two people, in a pub and no-one caring.  That was a real thing for ages, so I was worried that when we did this gig it would be the same.  But it actually turned out that the fans that came loved it, they sang along, and it really taught me a lot about who comes to the shows is more important than how many people, or how densely packed it is.

How do you feel about the prospect of touring for an album, given the uncertainties that you might have to call a show off at any given moment because of the guidelines?

It’s pretty nerve-wracking to be honest, we can’t really feel comfortable announcing anything yet.  We’ve got a pencilled tour that we’re not allowed to announce because I don’t want to let people down.  So that’s pretty tough, and even if that tour does happen, we’re going to clash with all of the other bands that tour anyway.  So, I don’t know if that’s a smart move or what, but we’ve basically developed our own back-up plan, which is going to involve an adaptation of in-store touring, and then we’re also looking at doing something else visually that’s going to be another level.

I actually saw you live last year at Shimmer Sounds in Birmingham, and what I really liked about that was how artists that may have been slightly lower down in a line-up were interspersed throughout the day.  So how do you feel that the current situation might affect newer bands that are coming through?

God, it’s so hard for them.  Coming through as a new band in indie music in itself is so hard but doing it when you’re amongst a pandemic with no touring, and if you’ve worked all this time to develop a decent live show, it sucks hard.  But I guess nothing can stop people from writing. The pandemic can stop you from seeing people, but it can’t stop you from being creative, and that’s where your power is, so think about that.

Do you have a favourite small venue that you’ve ever played at?

Yeah, I think my favourite small venue is The Lexington.  I change my mood depending on what day of the week it is, but I love the Lexington.

What is it specifically you love so much?

I like the fact that it is a pub downstairs, and it’s always really busy and the bands that play there are always really good.  I know my sound engineers there, day-to-day, so he always lets us come and stand on the mixing desk and watch all the bands.  I love the atmosphere of that area of London.  It’s a small venue but it’s quite big for a small venue, so it always feels really exciting.

Related to the live shows, if you could open a show for any music artist, who would you open for?

I would open for, you know that tour that was Kali Uchis, Courtney Love, and Lana Del Rey?  I would join that.  But also, my dream is to support Blondie.

I’m behind you on that one, I love Blondie.  So, your Instagram account. When you started the promotion for this next album, you burnt a vinyl copy of your first album.  Does that for you symbolise a big change in direction musically?

It just symbolises setting fire to the past to ignite our future for me.  I think it’s like, I still love what we did for album one, but it’s time for the next season of what we’re doing, and I’m so proud of what we’ve made.

I’m excited to see it. To finish off, I see you’ve mentioned before you waited four years to release your debut album, why does now feel like the right time to release album two?

Well, I wanted to put this record out straight away.  We’d actually written most of this record before album one had finished its cycle, so it felt like I was hungry, and we got in the studio in October last year, and it’s been a waiting game for me since then.  I’ve literally been twiddling my thumbs, I’m like the least patient person ever.  So yeah, that was hard.  I would love to have done it sooner, but shit happens, the pandemic happened, so whatever.

Well that was great, thank you very much for that. Is there anything else you want to say before we finish?

Yeah, we’ve got a new single that drops on October 28th called ‘I Like The Way You Die.’  We’ve shot a Halloween themed music video, with some vampires in.

I saw you preview that on your Instagram live.  I am looking forward to that one definitely, and I am sure a lot of people will be as well. Thank you very much for taking your time out.

Thank you very much for having me.

‘I Like The Way You Die’ will be released 28th October 2020 via Foxfive Records. Written & Directed is due to released on 29th January 2021 and is now available to pre-order.