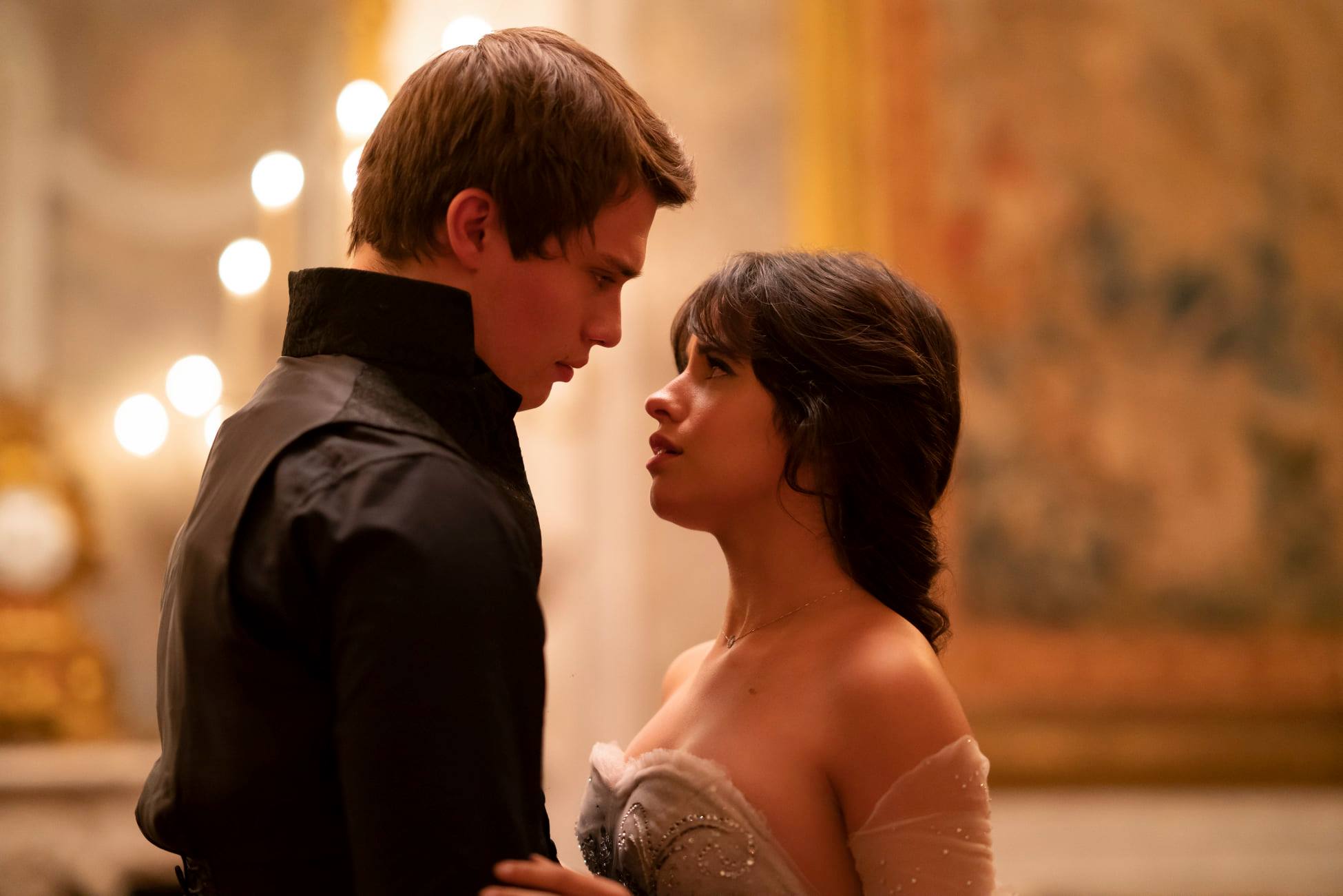 Amazon Prime’s Cinderella is truly a film for the #GirlBoss era, and unfortunately, not in a good way. There are no words to explain how bizarre the experience of watching Cinderella was. Starring singer Camila Cabello in her debut acting role, the film promised to be a feminist reboot of the classic fairy-tale, in the form of a jukebox musical. Whether it was a success in that is a completely different story.

Diverging slightly from the well-known versions of Cinderella, we follow Ella (Cabello), an aspiring dressmaker forced to be no more than a servant to her stepmother (Idina Menzel) and stepsisters. It is Ella’s capitalist dream of running her own business and earning money (rather than passion) that keeps her motivated when treated poorly by her family; it is also pretty much the extent of her characterisation, apart from some rather confusing attempts to make her witty and sassy which just fell flat. Meanwhile, Prince Robert (Nicolas Galitzine) is decidedly unambitious in contrast, having little interest in marriage or ruling the kingdom, or anything other than being rich, apparently. Somehow, a spark forms between them, although I found myself wondering what connection they actually had beyond their initial attraction to each other.

The music in Cinderella mainly included renditions of pop songs both recent and older, with a couple of original songs, but at times it felt as if they were merely singing for the sake of it, rather than to contribute anything to the story, as you might expect from a musical. Sometimes the music choices were just strange, such as the rather baffling mashup of ‘Whatta Man’ by Salt ‘n’ Peppa and ‘Seven Nation Army’ by The White Stripes in the middle of the ball scene. While there were many talented singers in the cast, some of the songs also sounded unnecessarily auto-tuned. However, one musical highlight was Doc Brown’s Town Crier, who gave all his notices through the medium of rap, which was one of the more enjoyable parts of this film.

One of my main issues with Cinderella was its lack of subtlety. Although it was trying to be a feminist, empowering version of the fairy-tale, its messages failed to go beyond a surface level idea of feminism, which was heavy-handed at best and did not feel as if it was doing anything new or revolutionary with the source material. I know the target audience is children, rather than cynical university students like me, yet I think even children would have understood the messages of this film without it being so obvious. Many of the characters were given no depth other than their prescribed role in the story, such as the Prince’s younger sister, whose role was to pop up out of nowhere eager to discuss her welfare reform plans for the country, only to be shot down because she is a woman. For characters like the Stepmother, who they tried to give more nuance to by giving her a backstory, it just became confusing as to whether we should sympathise with her or not, given how she treated Ella.

A frustrating element of Cinderella is that it had potential to be good. The cast was lined with stars such as Pierce Brosnan, Minnie Driver, Billy Porter, and British comedians such as James Acaster and Romesh Ranganathan, yet all of them felt criminally underused. Billy Porter’s Fab G could have been a refreshing, gender non-conforming take on the Fairy Godmother and was to an extent, but this character was relegated to one scene, feeling more like a glorified cameo, and given no better lines than the stereotypical ‘Yaass, future queen, yaass’ (yes, this is a verbatim quote). Even if these characters are meant to be smaller roles, there was still more that could have been done with them as they shined with what little material they did have. Of course, with this film being a movie-musical, the ubiquitous James Corden could not stay away from it, resulting in a rather horrifying scene within the film with his head stuck on a mouse’s body that will no doubt haunt my nightmares for weeks to come.

Although there were certainly some scenes I found entertaining, Cinderella, while having its heart in the right place, was a shallow attempt at making a feminist reboot of this fairy-tale that ended up ranging from tedious to just outright bizarre. If you are looking for a good musical retelling of a classic story, I would not point you in the direction of this film unless you want to spend two hours falling further and further into despair, however going in with low expectations can make this film more enjoyable.

Fan of movie-musicals? Check out these articles from Redbrick Film for more: