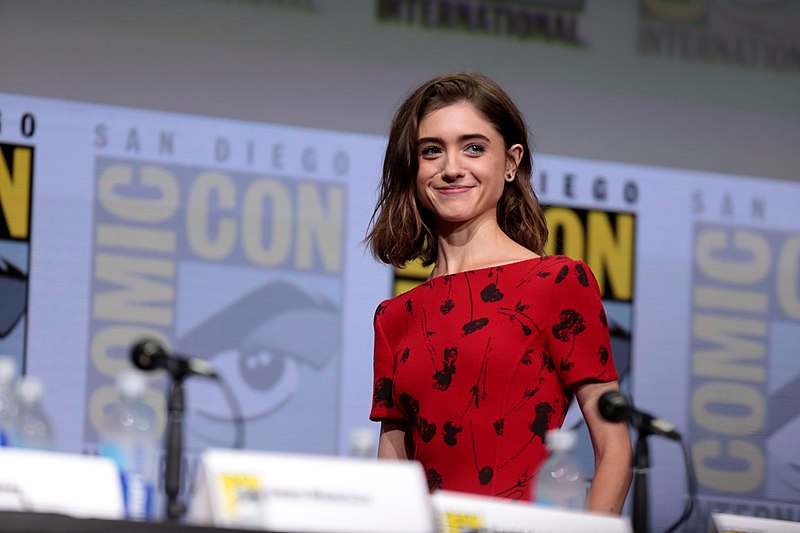 Film Critic Samantha Hicks enjoys Yes, God, Yes’ fresh take on the coming-of-age tale even if the plot leaves a little to be desired

AOL chats, burgeoning sexuality, and a dose of Catholic guilt – Yes, God, Yes is not your typical coming of age film. Based on her 2017 short film of the same name, Karen Maine’s first feature-length film is a refreshing take on the story of a teenage girl navigating newly-discovered emotions in high school. The struggle of Alice (Natalia Dyer, best known for her portrayal of Nancy Wheeler in Stranger Things) to overcome the guilt caused by her newfound sexual desires is all too familiar to young women raised in the strict environment of Catholic school and is a story seldom told in such a relatable and authentic manner. Yes, God, Yes is a very promising start to Karen Maine’s work as a director; this sensitive portrait of the difficult parts of growing up as a teenage girl is long-overdue on screen.

The film is set in a pretty nondescript town somewhere in the American Midwest, in the Autumn of 2000. Alice is your all-American girl: a model student and a seemingly devout Catholic. With a time frame of only a few days, Yes, God, Yes manages to tell Alice’s story of sexual discovery, her battle against unfounded rumours, and her reconciliation with her guilty conscience with ease. This period of time is difficult enough for a teenage girl growing up in an environment which suppresses and demonises female sexuality. To make things worse, false rumours that Alice has engaged in a sexual act (‘tossed the salad’) with a fellow classmate begin to break down her reputation. The majority of the film takes place at her school’s ‘Kirkos’ retreat for building a student’s relationship with God, a setting bound to make or break Alice’s journey into young adulthood.

Natalia Dyer’s charming performance as Alice is undoubtedly one of the film’s primary strengths. Dyer perfectly captures the innocence of a sheltered Catholic teenager – from her slightly bewildered expressions, to the delicate, measured uncertainty with which she delivers her lines. Her performance puts the audience directly into the shoes of a naive Catholic teen, regardless of whether they were raised in that specific environment. Despite many awkward, verging on cringe-worthy moments (such as a nun walking in on Alice grinding on a broomstick), the audience always sympathises with and roots for the protagonist. Even if you are not invested in the overall plot, it is nearly impossible not to feel sorry for Alice when things keep going wrong for her. Alisha Boe (best known for her portrayal of Jessica Davis in 13 Reasons Why) as camp leader Nina complements the casting of Dyer as Alice. A kind, if not slightly misguided individual, Nina is the ultimate cool girl that the girls at camp look up to, and Boe expresses this with such natural confidence that the audience, too, is swept up by her charm. Despite these actresses being known for very recognisable roles, their performances here are a fantastic demonstration that their talents extend beyond their performances in Stranger Things and 13 Reasons Why.

The concept of Yes, God, Yes certainly has much potential. A story centred solely around a female protagonist experiencing her sexual awakening where she overcomes her guilt is a story that has been somewhat neglected by other coming of age films. Indeed, the film is successful in many respects – its firm roots in reality make for a story with which any audience can empathise. The soundtrack perfectly complements the early 2000s vibe – alongside the original score, classic chart-toppers such as Christina Aguilera’s Genie in a Bottle punctuate each scene, giving a warm, nostalgic feel. The aim to create a nostalgic feel is clear and calculated, as the school and camp are purposefully very generic; it could be any small town in America, or any Catholic school, ensuring the setting remains a relatable aspect of the film. The numerous sexual scenes are handled well – they are not shown to be too serious, but also are not over-sexualised and toe the line well between keeping it lighthearted and comedic, whilst not losing the overall message of the film.

However, there are many occasions where Yes, God, Yes, unfortunately, falls short of expectations. For what could be an exciting storyline, the pacing falls flat during the middle of the film. The development between the exposition and the climax of the film dragged on a little longer than it could have – perhaps a faster pace to make it through certain scenes, or even a little more action on Alice’s behalf could have helped this. Not only this, but aside from Alice, and perhaps the priest leading the retreat, the other characters lack depth or development. This makes it much harder to have any sympathy when misfortune befalls other characters, nor understand the motivations for their treatment of Alice. By the end of the film, I was left wondering why the rumour about Alice ‘tossing the salad’ of classmate Wade started, and who the perpetrator was. Of course, it could be a reflection of the toxic catholic high school environment that ostracises people who fall victim to rumours. Still, the film would have benefitted from slightly more character development. This does not take away from the fact that Yes, God, Yes is a lighthearted and fun watch, and is definitely a promising start to Karen Maine’s work as a director.

Yes, God, Yes is the long-awaited refreshing take on the classic teenage coming-of-age story. It was fantastic to finally have such a sensitive yet humorous telling of a woman’s sexual awakening in this context. With its original concept and charming execution, it sets itself apart from the plethora of recycled stories usually seen within the genre. Despite occasionally missing the mark, Yes, God, Yes is certainly worth a watch – perhaps just not with your parents!

Enjoy this article? Try these Netflix picks from Redbrick Film: