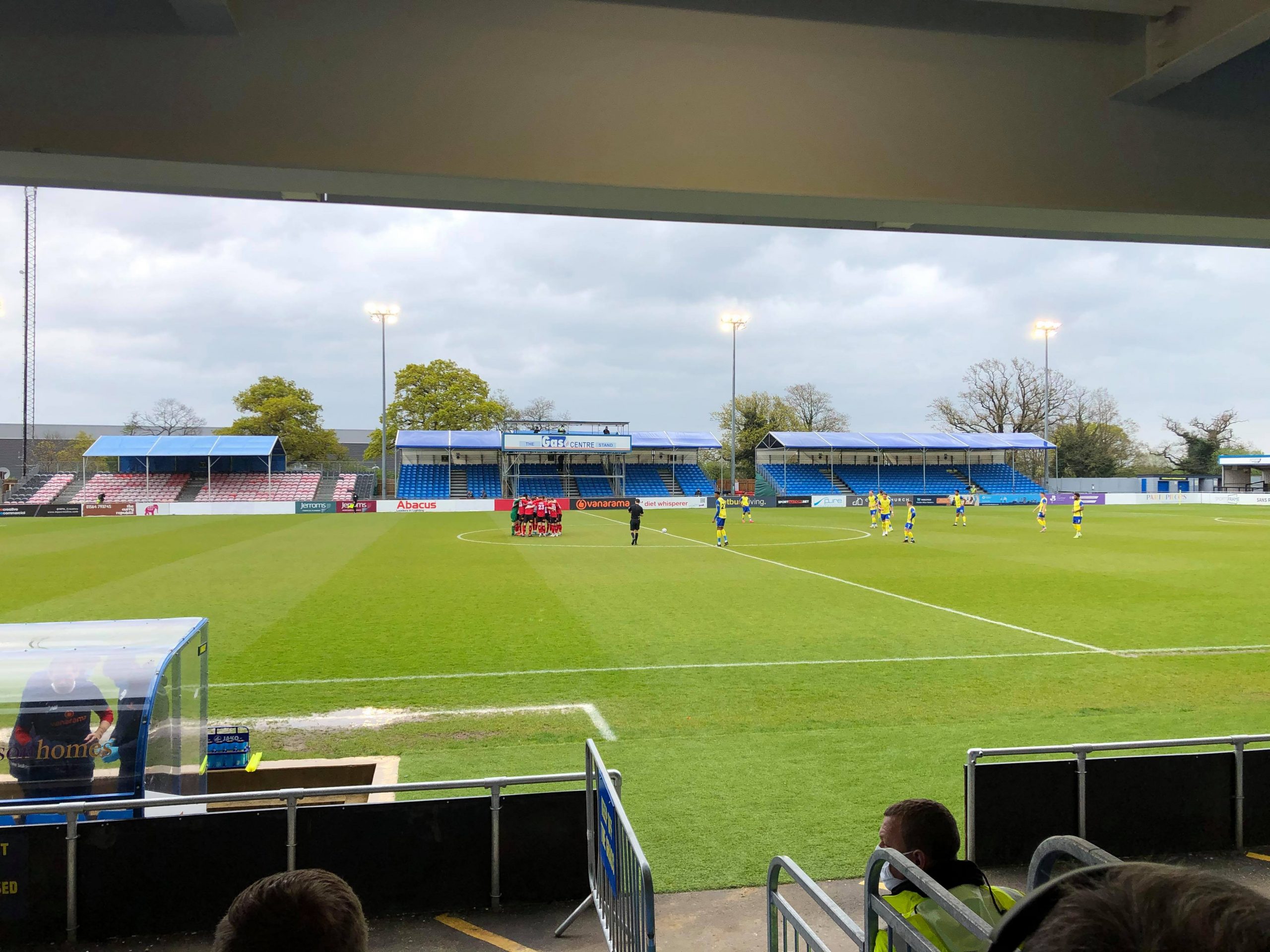 Moors’ Manager Mark Yates wanted a response from his side after two consecutive defeats against Yeovil and Wrexham. Their task was an Altrincham side that was winless in their last five matches, having slipped down the table after exceeding expectations early on in the campaign.

Following the Wrexham game, Yates, speaking to the Moors’ website, bemoaned his side’s lack of consistency this season. Yet, his players produced a convincing performance, which will give the Moors and their fans more confidence going into next season.

Alty manager Phil Parkinson, as promised, made nine changes to the side that drew with Notts County two days before. It was his team that threatened first when Josh Hancock forced a low save from Ryan Boot in the Solihull goal.

Moments later, Joe Sbarra played in James Ball from the left-hand side, and he picked out Kyle Hudlin in the box, who was unable to convert in the centre.

Spanish winger Yusifu Ceesay then struck the crossbar after some fine link-up play between Hancock and James Hardy.

However, Solihull looked the more dangerous of the two sides in the early stages, perhaps a sign of things to come. Justin Donawa latched onto an excellent cross by Jordan Cranston but misdirected his header wide of the post. Two minutes later, Donawa and Ball had even better chances to open the scoring, but two goal-line clearances from Alty’s Toby Mullarkey kept the scoreline level.

The visitors were denied by the crossbar for a second time when Sean Williams tried his luck from long-range.

The hosts, however, broke the deadlock after 38 minutes when Jordan Piggott’s near post flick on from Cranston’s corner found Jordon Thompson at the back post, who made it 1-0 on his home debut.

Just over ten minutes into the restart, half-time substitute Shaun Densmore headed into his own net after attempting to clear the ball from Kyle Storer’s free-kick. Some breathing space for the Moors and a mountain to climb for the Robins.

Altrincham almost replied instantly with a Hancock shot from distance, which found the side-netting rather than the back of the net.

The own goal, however, proved to be the major turning point in the game. Altrincham failed to create further chances to concern the Solihull keeper, apart from another Williams’ effort that earned the Robins a rare corner in the second half.

Parkinson made all three substitutes within the first 20 minutes of the half, but these proved ineffective as Kyle Hudlin extended the Moors’ lead after 65 minutes. Hudlin fastened onto a through ball from Sbarra and his finish was well-placed beyond the Alty goalkeeper Matty Gould. Questions could be asked about the goalkeeping from Gould, who misjudged the through ball and failed to close down the shot after rushing out.

Substitute Adam Rooney, best known from his time at Aberdeen and Salford City, almost had an instant impact, forcing a smart save from Gould within minutes of coming on.

Parkinson’s defence was breached far too easily in the run-up to Solihull’s fourth goal of the afternoon, although there was very little the keeper could do to stop substitute Cameron Archer. It was a tidy finish from the Aston Villa loanee, curling into the far right-hand corner.

Solihull Moors climb up two places to 14th in the National League as Yates’ side look to break into the top half and finish the season strongly.

Assistant Manager Neil Howard told the Solihull website: ‘We came into it on the back of a tough game on Saturday and they were coming thick and fast, so physically and mentally we had to prepare right. It was very pleasing to get a good win.’

Howard also reserved praise for midfielder Ball, who moved into the centre-back position and looked ‘comfortable’ after Ben Usher-Shipway picked up an injury.

The defeat leaves Altrincham in 17th place and without a win since their 1-0 victory at Maidenhead at the end of March. This was another off-day for a side bereft of confidence, but they have had a positive first season back in the top tier of non-league football.

Speaking to Redbrick, Parkinson was understandably downbeat with the result: ‘They didn’t have to work very hard to get their goals today, which is really disappointing. It was a capitulation in the end.’

On his decision to make nine changes to his side: ‘It was very disjointed, we made nine changes. I have to take full accountability for that, but we need to make decisions on players as well.’