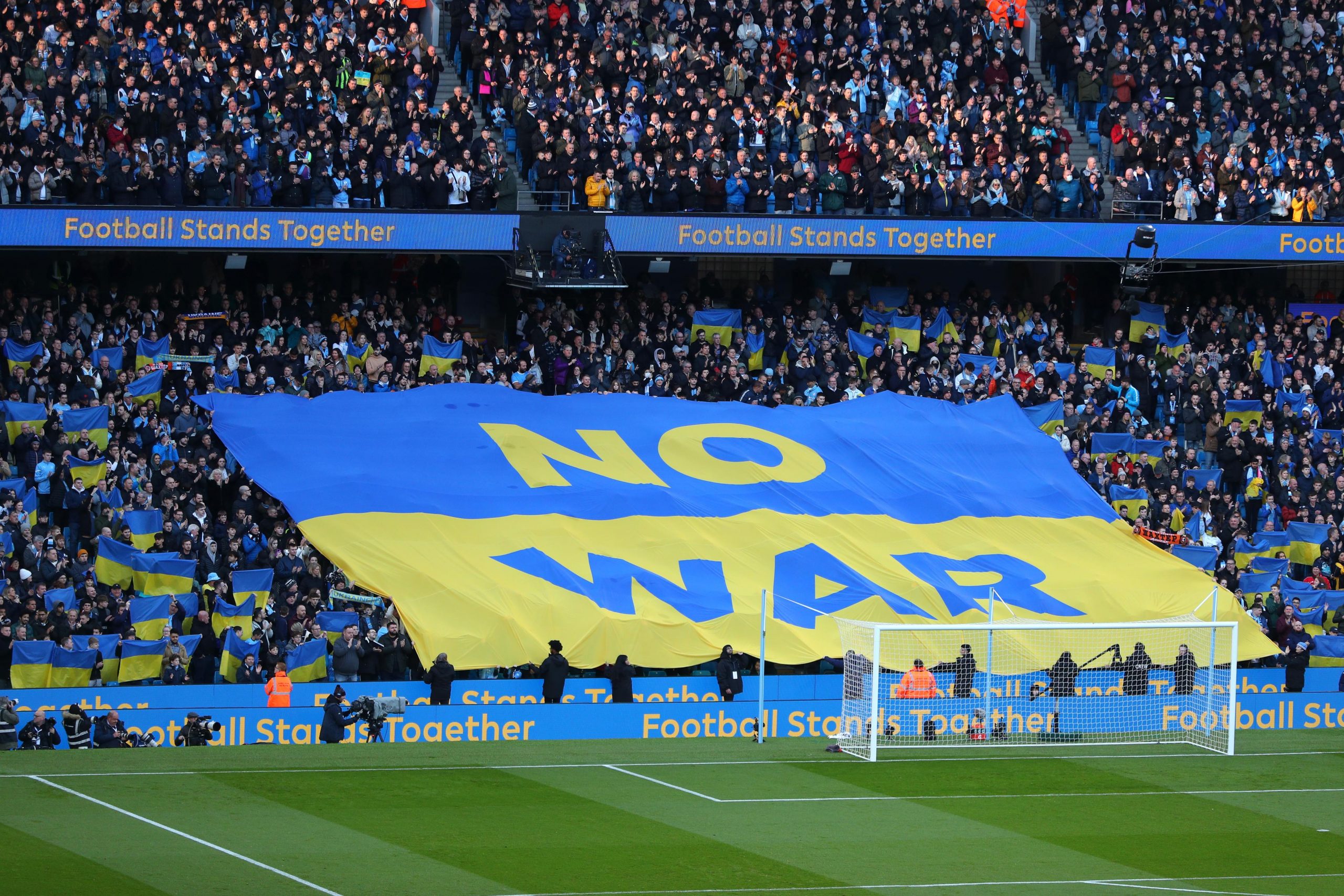 Written by Lauren Coffman
Published at 17:00 on 16 March 2022
Images by Twitter/@premierleague

With the situation in Ukraine on a knife edge, sporting bodies around the world have begun taking extensive action. Over the last fortnight organisations and individuals involved with a variety of sports have been defiant in their condemnation of Vladimir Putin’s war on Ukraine and the vast civilian causalities that have ensued, expressing solidarity with those impacted.

Sport has the capacity to be a vital tool for change, possessing an unparalleled global reach and substantial international leverage. Given Russia’s investment and success in a range of sports the role of the sporting world has been all the more relevant. Since Russian forces invaded Ukraine on February 24th 2022 we have seen this come to fruition, with some of the many measures taken to date outlined below.

One of the first bodies to react was the International Olympic Committee, who recommended the exclusion of Russian and Belarusian athletes and officials from competing in international events unless competing as neutrals; with no flags or national symbols on display and no national anthem.

Their official statement said, ‘In order to protect the integrity of global sports competitions and for the safety of all the participants, the IOC executive board recommends that international sports federations and sports event organisers not invite or allow the participation of Russian and Belarusian athletes and officials in international competitions.’

Subsequently, the International Paralympic Committee announced that Russian and Belarusian athletes would not be allowed to compete at the Winter Paralympics currently taking place in Beijing. Originally, they permitted the athletes to partake as neutrals, but swiftly overturned their decision following backlash.

In football, the two major international bodies, FIFA and UEFA, have both reacted decisively. A joint statement released by the organisations said, ‘Football is fully united here and in full solidarity with all the people affected in Ukraine.’ FIFA initially ruled that Russia would be banned from playing at home and would have to compete under a different name (Football Union of Russia). However, a host of nations, including England and Scotland released statements refusing to play Russia until the conflict ends, and consequently FIFA officially suspended Russia from all competitions until further notice on Monday 28th February. As a result, the men’s side will not partake in the upcoming World Cup play-offs whilst the women are at risk of being barred from competing at this summer’s European Championships, for which they have already qualified.

On Friday 25th February, UEFA announced it would be moving the 2022 Champions League Final from St Petersburg to Paris. This was followed by the removal of Russian company Gazprom as the Champions League title sponsor as well as the exclusion of Spartak Moscow from the rest of this year’s Europa League.

Domestic teams have also shown their solidarity across the last two game weeks, with on-pitch tributes across many major European leagues. In the Premier League, Ukrainian internationals Oleksandr Zinchenko and Vitaliy Mykolenko shared an emotional embrace prior to kick-off between Manchester City and Everton, whilst West Ham’s Andriy Yarmolenko was granted compassionate leave in the wake of the conflict.

Elsewhere, action has been taken across many other sports too. Just this week Formula One officially terminated its contract with the Russian Grand Prix, declaring that as long as Putin holds power the sport will not return to Russia. This decision was announced following the refusal of many of its stars, including former and current World Champions Sebastian Vettel and Max Verstappen, to take to the track in Russia for this year’s race. F1 team Haas have also withdrawn driver Nikita Mazepin’s contract, and Motorsport UK has banned any Russian drivers from competing in the UK.

In Tennis the International Tennis Federation has stipulated that Russian and Belarusian players must compete as individuals, banning their federations from future competitions, whilst World Rugby have also banned the two nations from ‘international rugby and cross-border rugby activities’ for the foreseeable future.

In such an ever-shifting situation, this will certainly not be the end of the action taken by the sporting world. For as long as Putin refuses to move towards peace and end the war, there is little doubt that Russian athletes and sports will continue to face heavy consequences.