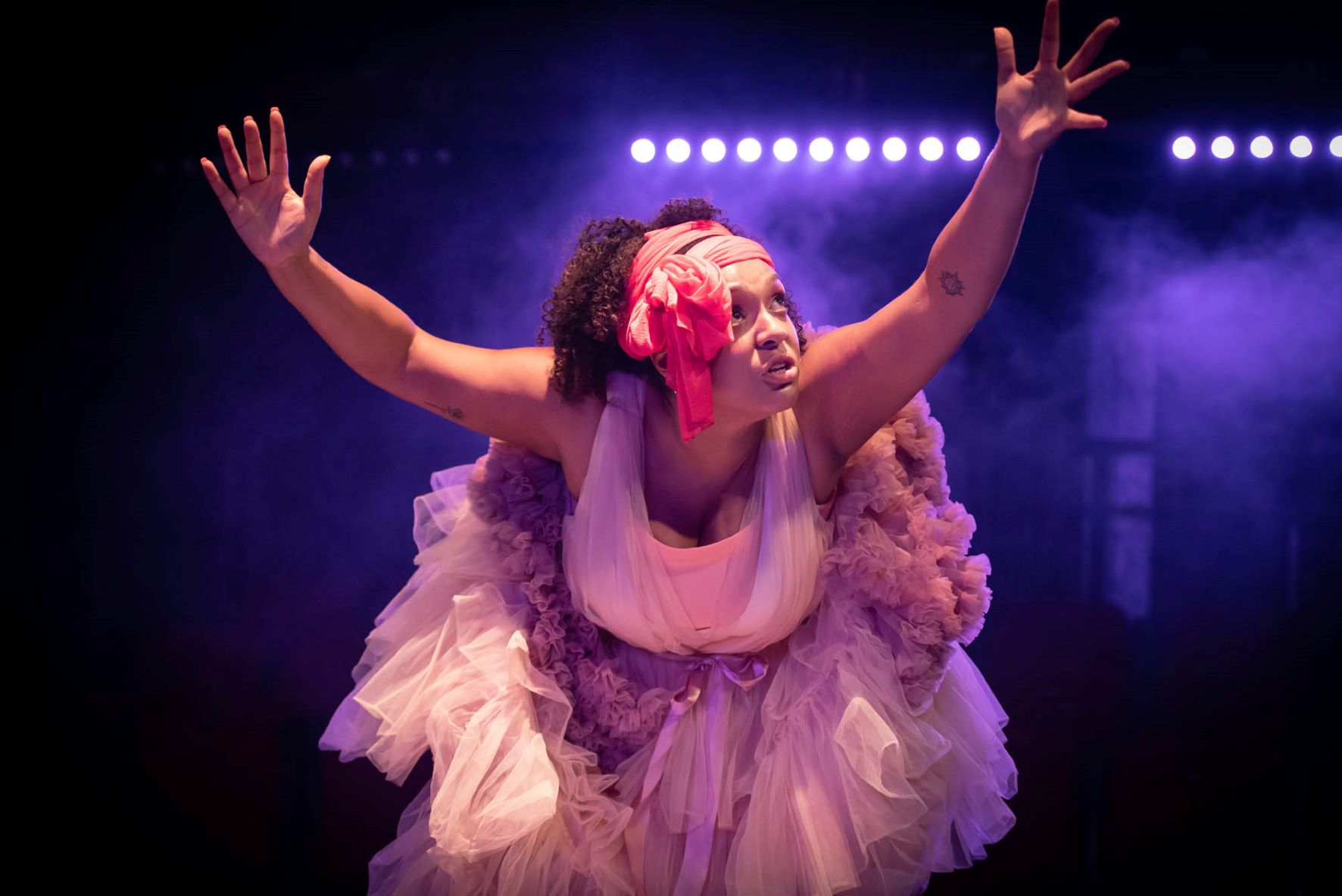 Content Warning: This article discusses a play that contains themes of rape and violence/abuse.

Written by Frankie Meredith, directed by Balisha Karra, and starring Yasmin Dawes, this female-led one-woman-show comes at a critical time for reproductive rights. While it originally premiered last summer in Wood End, it feels all the more relevant after a problematically patriotic jubilee, and as American states have begun to obstruct bodily autonomy. May Queen takes the idea of a Coventry Carnival and turns it on its head, combining folklore, rumour and one black girl’s experience, to see what happens when the queen is toppled.

16-year-old Leigh (Yasmin Dawes) has won a competition to act as May Queen for a midsummer Coventry festival, allowing her to spend the grand sum of £40 on a taffeta cake-topper-style dress, and feel like royalty for a day. The stage is decorated with bunting, and a circus podium sits in the centre, making Dawes into the main spectacle. She enters offering a kind of chant to Lady Godiva, a Coventry legend, repeatedly asking her, ‘Godiva, will you ride again?’ This theme returns later when Leigh is at her most vulnerable, evoking the power of a historical woman who has come before her.

The in-the-round performance makes it feel both intimate and detached, as Dawes weaves different stories into the 90-minute set. She introduces the most important story early on: how her beautiful dress became blood-stained, and not with her own blood. Her tone is child-like and yet vigorous, with none of the awkwardness that sometimes arises with a one-person-show.

As the narrative unfolds, Dawes uses mime and impersonation to create different characters: her distracted but caring sister, her hopeless kind-of-boyfriend, and the pretentious organiser of the festival. The latter character, Mark (nicknamed ‘Sparks’ for his M&S wardrobe) falls somewhere between sleazy and tokenistic. He instructs Leigh to find an outfit as May Queen that is ‘pure, virtuous and maidenly’. What starts out as a hilarious joke becomes a haunting mantra, trapping Leigh within harmful expectations.

Dawes uses elements of stand-up comedy to lighten the mood, and there are some excellent one-liners, from embarrassed self-reflection: ‘who asks for a squash?’, to her thoughts on the ridiculousness of the May Queen character: ‘I need to look like I might have sex with you, but back out last minute and go milk a cow’. This exists alongside the darker themes, with a backing track capturing the catcalls that Leigh faces when walking two minutes home. This track is used several times, so that the abuse becomes almost mundane.

Lighting and music move seamlessly in and out, as if conjured by the actor, which compliments the themes of folklore in the play. Leigh finds strength in the mythical origins of the city, from the ancient tree that is said to have started everything, to the brave sacrifice of Godiva. As May Queen, Leigh is invited to be part of this history, but not on her own terms.

When the May Day arrives, Leigh shares hilarious observations about the day, from the maypoles and Morris dancing, to the oddness of the city all decked out ‘like England have just won the world cup’. Despite the flags and crowds, this is not a space where Leigh feels protected, and she is still subject to the prying eyes of passing men and the comments of onlookers. This raised an important question about who festivities like the jubilee are for, and who they exclude.

At least at first, Leigh enjoys the cider and the procession, feeling finally visible as a young black woman. The addition of a red headscarf and mauve cape complete the outfit, and she exclaims that ‘my hair’s poppin, my skin glows’. But soon, the atmosphere becomes more stifling than welcoming, with a hog roast nearby ‘blistering in the heat’, becoming a symbol for the objectification of her own body.

The production is able to deal with the most difficult parts of the action by focusing on storytelling rather than visuals. This prioritises Leigh’s perspective, while also resisting any romanticisation of her abuse. In a moment of ingenious audience participation, she asks the audience to share in her suffering by chanting, ‘Godiva, Godiva will come’. This simultaneously holds the audience accountable, while also acknowledging the collective weight of misogyny.

If Dawes starts the play as an unassuming teenager, by the end of it she is Beyonce in ‘Lemonade’. Her prowess as she dances around the stage is infectious, and the final scenes really demonstrate the actor’s versatility. Careful direction stops this 90-minute piece from feeling too intense, and excellent writing crafts an intriguing literary narrative, but above all – Dawes’ performance is astounding. May Queen is a triumph for Coventry, and an urgent call for us to rethink tradition.

Theatre Review: Would You Bet Against Us?