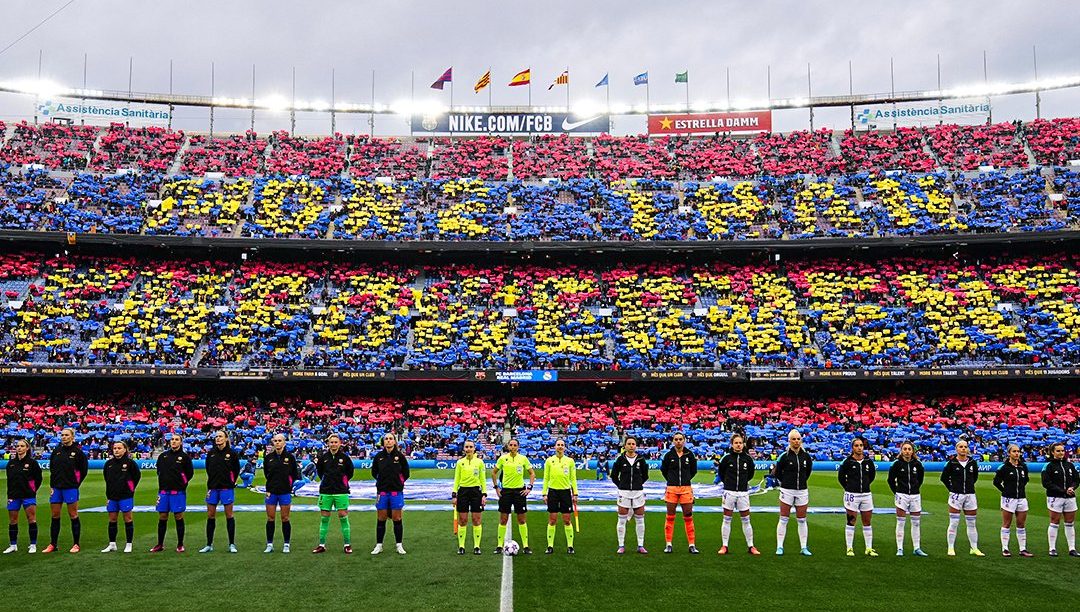 Written by Marianne Morgan
Published at 17:00 on 31 May 2022
Images by @brfootball/Twitter

Barcelona Femení made history in March, breaking the record attendance for a women’s football fixture. The first leg of their UEFA Women’s Champions League semi-final against Wolfsburg saw an impressive 91,648 spectators in attendance.

This came just 3 weeks after originally breaking the attendance record with their game against Real Madrid in the previous round of the Champions League, which had an attendance of 91,553. Barcelona Femení usually play at the Johan Cruyff Stadium, the training ground for the men’s team, with a maximum capacity of 6,000.

Prior to this, the record attendance for a women’s game was 90,185 for the FIFA Women’s World Cup Final in 1999 between the United States and China at the Rose Bowl in Pasadena, California.

Barcelona Femení secured their third successive league title after beating Real Madrid 5-0 in March with six games to spare. The team have won all of their games this season and have finished the season with a maximum 90 points, boasting a goal difference of 148.

The side’s season-long winning streak came to an end however, after losing 2-0 in the Champions League semi-final second leg against Wolfsburg.

Barcelona Femení were also unable to repeat last season’s treble. The side failed to retain the Women’s Champions League title, losing to Lyon 3-1. Captain Alexia Putellas scored Barcelona’s only goal to take her tournament tally up to 11. This made her this season’s top scorer.

However, the team still have the opportunity to secure the double for this season. Barcelona will face Real Madrid once more later this month in the semi-final of the league cup, named the Copa de la Reina.

The achievements of the women’s side shine against the backdrop of a turbulent season for the men’s team. A poor start saw them occupy 9th place in the table, and consequently sacking Ronald Koeman as manager. The team failed to make it out of the group stages of the Champions League in December. In April, they were knocked out of the Europa League by Eintracht Frankfurt. This was a game that saw some 30,000 Frankfurt fans attend despite only being allocated 5,000 tickets, an incident that many fans have criticised the club for.

This record attendance has also sparked a debate about the choice of venues for the upcoming 2022 UEFA European Women’s Championship, taking place across England this summer. Icelandic player Sara Björk Gunnarsdóttir has criticised the decision to use Manchester City’s Academy Stadium. Due to UEFA tournament rules not permitting the use of standing terraces, the venue will only be able to accommodate 4,700 fans, making it the smallest stadium at this year’s Euros.

In conversation with the ‘Their Pitch’ podcast, Lyon player Gunnarsdóttir referenced the sell-out crowds Barcelona have achieved this season, describing the choice as ‘disappointing’ and ‘embarrassing’. She also said it is ‘disrespectful towards women’s football’ given how much the game has grown in recent years, adding that decisions like this make no sense and set the women’s game back.

Despite this, record crowds are expected at this summer’s tournament. So far, eight games at the tournament have already sold out, including both of Iceland’s fixtures at the Academy Stadium. All of England’s group fixtures have sold out, the first of which is against Austria on July 6th at Old Trafford. The final at Wembley has also sold out. With all 87,200 tickets sold, the final will break the all-time attendance record for a women’s football match in England.