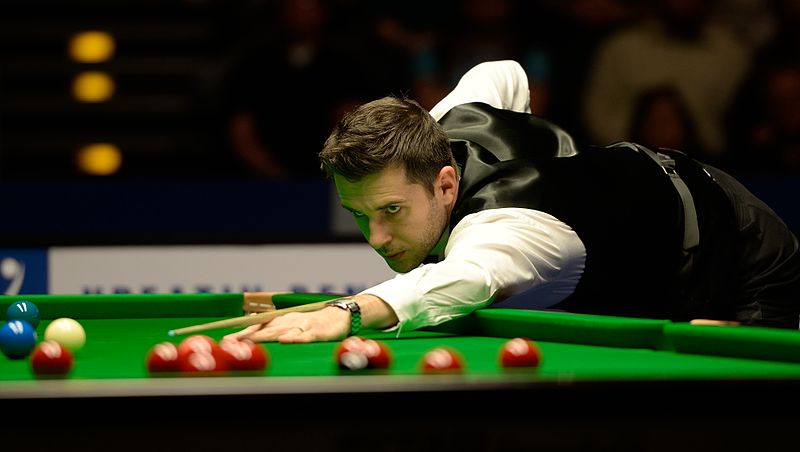 Will Rogers
Hi! I'm Will. I'm a second year history student at the University of Birmingham. My main hobbies are playing squash and snooker and I also enjoy reading about history, geography and sport.
Published at 16:30 on 11 May 2021
Images by Wikimedia Commons/DerHexer

The Crucible Theatre in Sheffield played host to its 45th World Snooker Championship, with Mark Selby, the Jester from Leicester, clinching his fourth title, which brings him level with the mighty John Higgins. The tournament, despite no maximum breaks, produced many magical moments, yet none were more special than hearing the Crucible roar for the final, the first capacity crowd in Britain in over a year. The sight and sound of the crowd was truly an emotional, phenomenal sight to see, even bringing a tear to my eye.

144 players bore down on Sheffield to play in the sport’s greatest tournament, with the qualifying round whittling this down to just 32. In the first round we witnessed two classic matches between Stuart Bingham and Ding Junhui, and Jack Lisowski and Ali Carter. Both matches featured some high-quality potting and gripping snooker, with Bingham’s final frame victory being delayed due to tournament rules, further raising the tension.

The second round witnessed some major upsets, with reigning champion Ronnie O’Sullivan being knocked out in a final frame decider to Anthony McGill. Higgins fell to another former champion in Mark Williams, and Masters champion Yan Bingtao was comfortably defeated by the resurgent Shaun Murphy.

As the quarter finals began, the tension ratcheted up another level. Kyren Wilson, last year’s finalist comfortably defeated 2010 champion Neil Robertson, and is quickly becoming a major force of the next generation of snooker talents. Mark Selby destroyed three-time champion Mark Williams, putting on a devastating clinic of potting and positioning to beat the experienced Welshman. The best match of the round again involved a final frame decider with Anthony McGill, but this time the Glaswegian fell at the hands of Stuart Bingham. Finally, World Number One Judd Trump was shocked by Shaun Murphy 13-11, with the in-form Trump’s defeat leaving the door open for the remaining players.

In the first semi-final, Murphy showed his class and return to form by defeating Wilson 17-12, never looking fazed by the occasion or the quality of his opponent. Much has been made about Murphy’s troubles, yet he showed that class is permanent in coming from 10-4 down to beat the Englishman. Selby’s match with Bingham was much closer, trailing 13-11 overnight only to return in the final session to clinch the win to reach his fifth final. Bingham was hoping to become only the fourth ever qualifier to win the tournament and the first since Murphy in 2005, but after a few re-racks he could not withstand Selby’s tactical masterclass.

The final was another tense affair, with many predicting Selby to sweep his way to a fourth title. This domination was not the case, but his victory never looked in doubt, despite some high-quality snooker from Murphy. However, in the 33rd frame, Murphy missed a red which would have led to a 17-16 scoreline, allowing Selby to clear the table and claim the championship. The 18-15 score represents one of the closest finals in recent years, with the capacity crowd being treated to drama and quality from both players throughout. Murphy was extremely gracious in defeat, recognising the progress that he has made and the quality of the champion.

Despite Selby’s triumph, his moment with his family and his £500,000 cheque, this tournament will be remembered for the return of the fans and the semblance of some normality. The championship was played at the highest quality, with a record 108 century breaks (with a further 106 in qualifying) and Murphy making the highest break with 144 in the second round. Steve Davis commented that Selby was ‘the best all-rounder we have ever seen’, a strong claim from the six-time champion, but completely understandable to anyone watching the final. Many believe that he can chase down Stephen Hendry’s Crucible record of seven titles.

The final word must go to the fans. Despite rules, masks and testing, they truly made the final and hopefully we will never see a quiet snooker arena again. Let us hope that this is the start of our wonderful world of sport returning to normality.