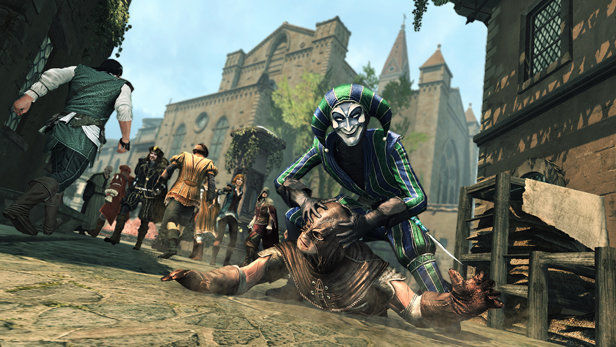 Ismat Alhassan hits the ground running with a retrospective on Assassin’s Creed: Ezio Trilogy, asking what makes the character so dear to fans of the series

Today, Assassin’s Creed 2 and Brotherhood still hold the 1st and 2nd Highest Metacritic reviews respectively out of all the Assassin’s Creed games, with a scores of 91 and 90 for PS3. Revelations falls behind with a score of 80. It is truly astonishing that the first two games which were released in 2009/10 have a higher rating than the newest instalment, Assassin’s Creed Valhalla, which has scores ranging from 80-84 on different platforms. Personally, I agree with the rankings. It’s no surprise that the ratings of Valhalla were lower. Ubisoft could be beating a dead horse with 12 main games and 17 spin offs. Will they ever achieve the success they once had with the Ezio Trilogy? I don’t think so.

With the success and ratings of the games, I often wonder why Ubisoft never pursued a similar pattern, showing us the beginnings, middle and end of an assassin’s career/life. Following Ezio through three different games gave us a chance to connect with him on a personal level and really empathise with him. We saw him grow up and mature in a way that the other AC games haven’t really shown us. As someone with Autistic Spectrum Disorder I often struggle with change and this has translated into my gaming life. Following one character through three games was refreshing and the continuous storyline put me at ease and gave me further incentive to continue playing the games.

As someone who completed all three games in the Ezio Trilogy before delving into the first instalment in the AC series, the differences between the games are immense. I tried to revisit Assassin’s Creed but alas, I found myself increasingly frustrated by the playability and lack of control I felt I had over Altaïr on PC. Whilst Assassins Creed is a legendary game, playing it after any of the other AC games is, at least in my humble opinion, extremely difficult. Playing the game felt somewhat temperamental, the controls were extremely frustrating, and I found myself failing missions that I would’ve passed had it not been for the shoddy controls. I also felt stuck in a time loop. The repetitive nature of the game made it easy to get bored and zone out without really absorbing any of the story. Whereas, with the subsequent games, there was a lot of variety to the gameplay and the playability had largely improved.

Compared with newer games, there are many differences to unpack. I’ve recently started playing Odyssey, released in 2018 and whilst I do commend the developers for the graphics and gameplay, something about it doesn’t sit well with me, it doesn’t quite feel like an Assassins Creed game. This may be due to my attachment to Ezio as, as I mentioned before, following Ezio through three different games gave me a connection to him. I personally liked the trilogy for its simplicity and gameplay. Unlike the newer games, there weren’t several options to upgrade weapons and clothing, weapons could only be bought and not collected, there weren’t levels to each weapon or piece of clothing and eagle vision wasn’t a literal eagle. Eagle vision was a signature ability that really connected all the games together, replacing It with an eagle and a revelation skill complicated it for no reason and in my opinion lengthens the amount of time it takes to complete missions.

ASD can mean that routines are very important to me. the Ezio Trilogy became engrained in my routine from the moment I first installed Assassins Creed 2. After several days of playing the trilogy religiously and completing all three games, I felt like I had an Ezio shaped hole in my heart. I tried to fill this hole with Odyssey, but it never became part of my routine like the Ezio Trilogy did.

Thank you for reading this piece! Check out more from Redbrick Gaming here: