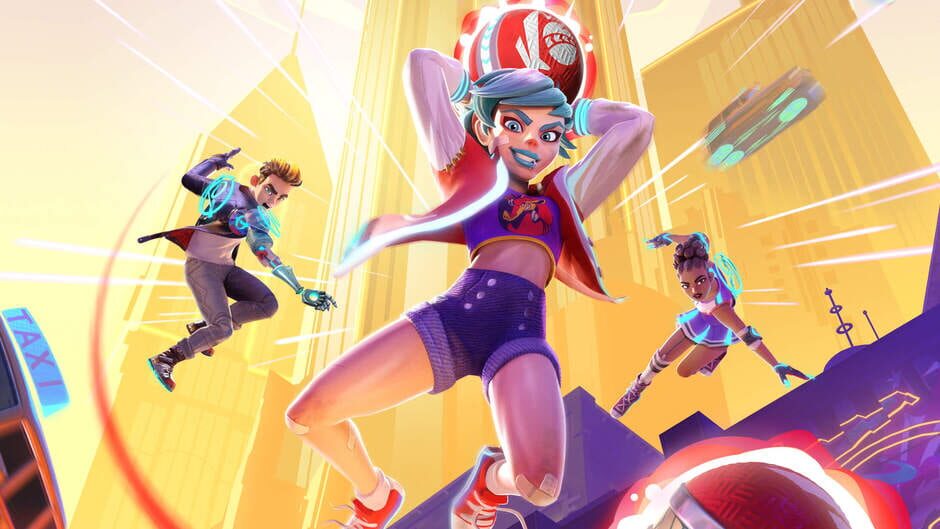 Looking for the next big sports game? Sam Arrowsmith plays Knockout City, to see if this dodgeball-influenced game is as fun as the sport.

Despite a certain…aversion to P.E lessons, I have fond memories of playing dodgeball in high school. When you’re that age, nothing matches the excitement of darting and weaving about, while lobbing balls at the opposing team. That nostalgia translates exceptionally well into Knockout City, as fearsome dodgeball matches unfold across a retro-futuristic metropolis.

As a new player, you have ample opportunities to learn the ropes. The Training courses take you through all the arenas available at launch, teaching you various techniques to help you hold your own on the battlefield. Three main shots are available to you, the standard straight shot, the slow but powerful lob shot, and the fast and agile curve shot. This seemingly simple system conceals a wealth of tactical options, and you very quickly learn how to turn them to your advantage, allowing you to bend your shots around obstacles and bypass your opponents’ defences. It only takes two hits to “knockout” an opponent, scoring a point to add to your team’s total, with your fallen adversary respawning mere seconds afterward.

When you yourself are on the defensive, your options are either dodge the ball, or stand your ground and catch it. The latter option is critical to success, as it can very quickly turn the tables on your attacker, but refining this option is a matter of timing. It took me quite a few goes to get this right, but I got a truly satisfying feeling the first time I caught the ball. 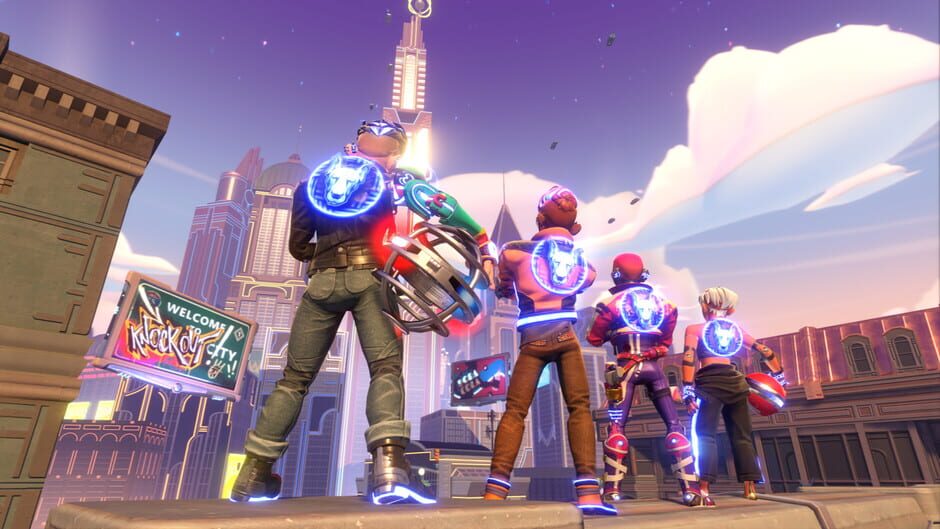 Knockout City also comes equipped with special balls, with their own strategic decisions. The Moon Ball, for example, lowers your personal gravity, allowing for greater mobility options, and sends opponents flying further when you hit them. On a knockout blow, humorously, the anti-gravity sends your rival slowly floating off before respawning, a key example of the sense of fun this game has. If you’re really stuck for ammunition, though, the game still has you covered. Each player has the option to “ball up”, allowing you to curl into a ball to be thrown by your teammates, becoming a dodgeball in your own right. You can even be charged up for an Ultimate shot, unleashing an explosion with excellent area-of-effect damage. Even when thrown normally, a single hit from a balled-up ally will wipe out both your target’s lives, simultaneously helping a team stage a comeback and showcasing the game’s humour.

The cartoonish style permeates all aspects of the game and can be seen most notably in character customisation. Knockout City offers an extensive collection of options to make your character your own, allowing you to customise your avatar’s hairstyle, outfit, gloves, and facial features for a staggering variety of combinations. Even within certain outfits, you can earn chips to “hack” these clothes to equip new colour schemes. Additionally, you can also earn a range of poses and taunts, with the game letting you select a pose for entering the arena, victory, defeat and being awarded the coveted title of MVP from any given match. These poses are definitely my favourite aspects of customisation, and in the future, developers Velan Studios and EA will be able to create more and more complex emotes, as games like Fortnite, Destiny and PUBG have across their development histories. 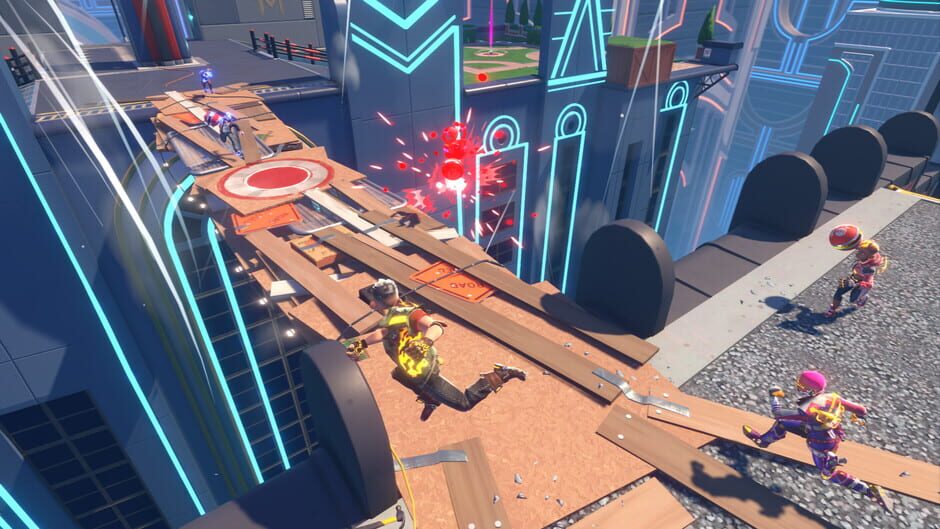 Also reflecting the likes of Fortnite and Destiny is Knockout City’s use of the “Battle Pass” mechanic, with Season 1 released at launch. While an effective use of scaled rewards, these have sometimes felt like a bit of a grind to me in other games, however Knockout City’s “Street Rank” system does make it less of a chore. Firstly, there is no premium rewards tier, so when you level up, you know you’re getting all the rewards. Secondly, the XP payout from missions is high enough that it does not feel like it will take a lifetime to reach the upper levels. Energy drinks that temporarily increase your XP output also make this easier.

The developers have also done a very good job of making gameplay varied. Several game modes make up a playlist, and, at regular intervals, three of these game modes are randomly chosen to be run, to make sure the selection does not get stale (both casual and ranked modes are available). Team KO represents the standard setup, but there’s also Coin Hoarders, where teams vie to seize all 8 coins in the field, and Ball-Up Brawl, where there are no dodgeballs on the field, forcing your teammates to “ball up” to achieve victory.

Knockout City’s  variety at launch is excellent, and in future updates, Velan will no doubt expand on these. The game has also begun with 5 stages, compatible with any game mode. Concussion Yard is my favourite, allowing you to brawl across a tightly-contained construction site and among several levels of platforms, allowing an extra dimension of combat. This course also features an enormous swinging wrecking ball, which can present a hazard, but can also be used creatively, to bash you out of the path of a ball you know you will not catch. However, these five courses can become tedious, and Velan will need to expand on this roster to help maintain interest. The world they have created certainly allows for plenty more stage options in the future. It is also important to add that, while it is possible to play all of these modes solo, getting the best out of the game, and its teamwork elements, requires a “crew”. Co-ordinating through voice chat will make you much more effective on the battlefield than simply using the emotes to ask randomly matched allies for help. 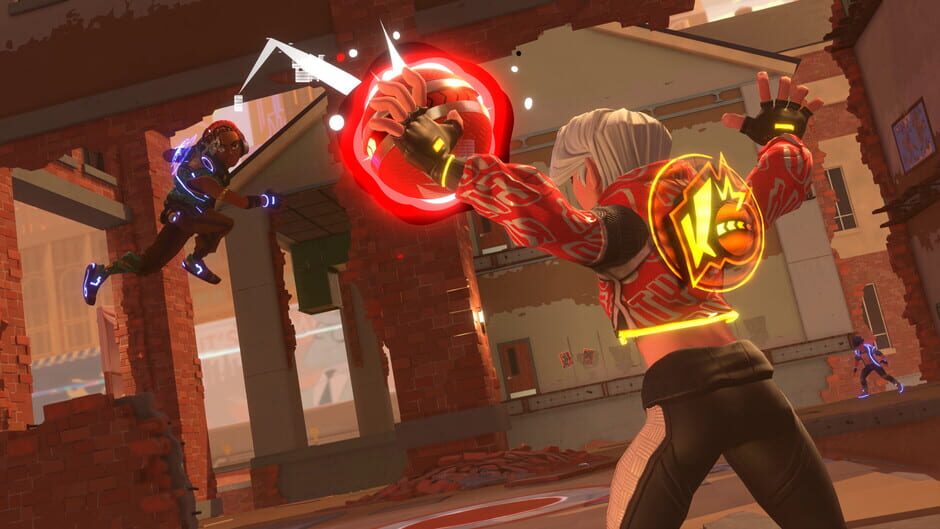 Overall, this game is an impressive multiplayer experience, with plenty of content to get stuck into from launch, and more on the way (a summer event has, at the time of writing, just begun). With restrictions set to continue until July 19th, it may well be an excellent time to get your kicks in Knockout City.

Liked this article? Check out more from Redbrick Gaming: