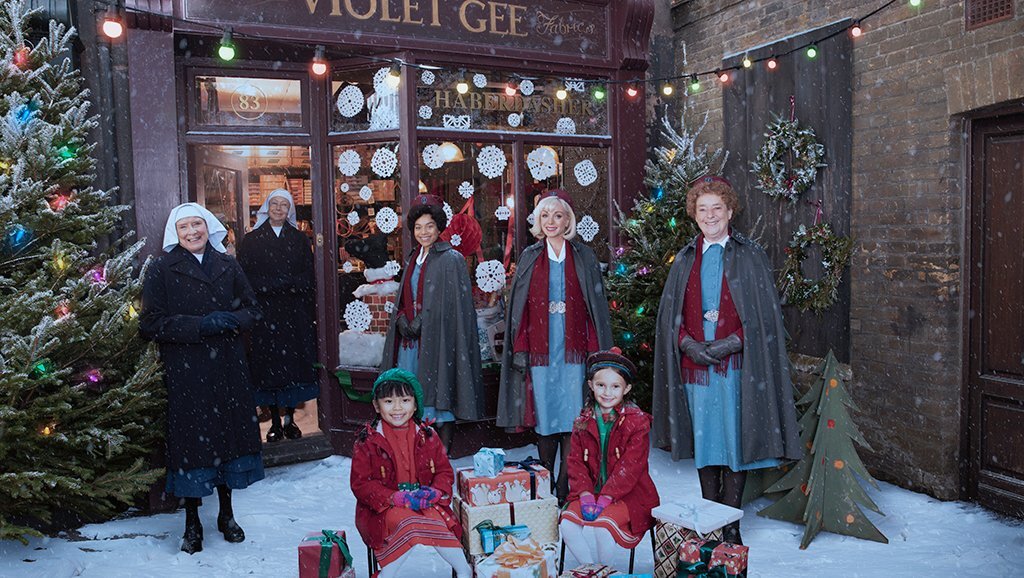 The 2020 Christmas special expertly winds three storylines together: tragedy as Sister Monica Joan (Judy Parfitt) suffers a fall, Shelagh (Laura Main) meets an old acquaintance who is struggling with her pregnancy, and a circus comes to Poplar. This is a classically constructed Christmas episode of Call the Midwife, and it is clear that their formula works well – there is never a dull moment during the special, and you find yourself invested in all three storylines! Despite featuring uplifting moments, the special does not spare the audience the tougher, often heartbreaking moments. It is a real talent of writer Heidi Thomas to create storylines full of difficult issues whilst ensuring an overall heartwarming episode worthy of the prime Christmas Day time slot. Admittedly, I had hoped for a happier storyline after this past year, but Call the Midwife does tragedy so well that by the end, I was ultimately glad that they stuck to what they do best.

Call the Midwife always tackles difficult issues faced by individuals and communities in the 1960s, and does so with great sensitivity. The Christmas special was no exception. Tying into themes introduced in season nine, the Christmas special chiefly focussed on the problems women face when seeking medical care. The episode explores this through the eyes of elderly Sister Monica Joan, and Shelagh’s pregnant friend Gloria (Katie Lyons). Despite the issues being more indicative of medical care in the early 1960s, Call the Midwife invites the reader to draw parallels with the modern-day – the feeling that you are not being listened to, or the feeling that doctors are not prioritising your concerns is unfortunately relatable to women today. Call the Midwife’s ability to tackle such issues is invaluable – weaving difficult topics into a somewhat quaint picture of mid-century London ensures that often-sidelined issues in mainstream media can remain a topic of conversation.

Such issues would not be able to be tackled with such sensitivity without the help of a fantastic cast. Judy Parfitt’s portrayal of fan favourite Sister Monica
Joan is an excellent example of elderly representation in mainstream media – an often sidelined demographic. In the Christmas special specifically, Parfitt artfully creates a character whose kindly and inquisitive demeanour appeals to audience members of all ages. Alongside the main cast, guest star Peter Davison’s portrayal of circus master Mr. Percival was a real highlight of the episode. It is not often that supporting characters in Call the Midwife Christmas specials have such an impact on the audience, nor are they usually particularly memorable. However, Davison manages to create a fleshed-out character through his limited scenes – a loving father who also loves his career in the circus, one who cares for those he loves and new acquaintances alike. Whilst all performances were crucial in shaping a fantastic Christmas special, both Parfitt and Davison stole the show, and the episode is worth watching for them alone!

This year’s Christmas special was an impressive feat for the cast and crew. Restrictions in place during filming due to the Covid-19 pandemic meant
that virtually all of the special was filmed in line with social distancing guidelines. Unless you specifically look out for awkward distances between the cast, camera angles and fantastic acting do all work of covering the space up. For the audience, this looks seamless and certainly demonstrates the successes of filming during the current climate.

Joyous as always, with the perfect amount of tension and mild peril, the Call the Midwife Christmas special is the perfect end to the year and is certainly a promising prequel to series 10, which is set to air during 2021. Being a festive staple of every Christmas in recent years, the Call the Midwife special helped restore some normality to what has definitely been an unusual Christmas, to say the least.