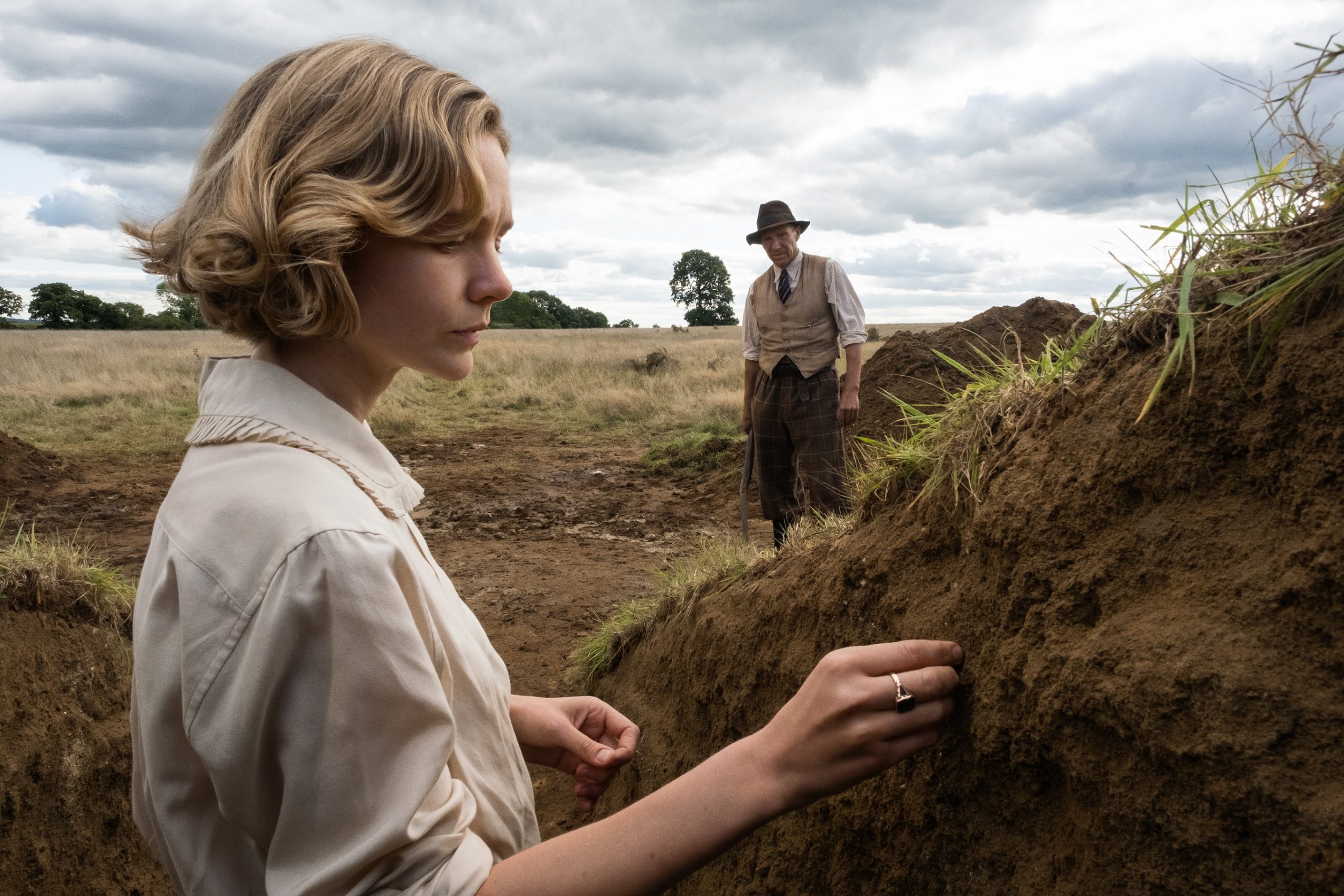 Film Critic Annabel Smith is impressed by the complexity and warm visual style of The Dig, arguing that it has a lot to say about archaeology and British identity

Written by Annabel Smith
Published at 13:00 on 21 February 2021
Images by Larry Horricks / Netflix

A simple story set against the stirrings of war and the realities of memorialising history. Based on a true story and the book by John Preston, The Dig follows the excavation of an Anglo-Saxon hoard called Sutton-Hoo. Ralph Fiennes takes up the role as the excavator Basil Brown, tasked by Carey Mulligan’s character Edith Pretty – whose property the site was founded on. The orangey-brown lighting covering the film cements it as a period piece, but one feeling real and new – untouched by time. The Dig is a refreshing story in a mesh of repetitive explorations of the 30s and 40s which is filled with world war content. It covers life still trying to occur despite the anxiety and underlying dread throughout the movie.

The cinematography is artistic and portrays the brilliance of the discovery and the impending war in a tense, yet subtle way. The British countryside is seen in all its authenticity; the constant rain showers that affect the dig, the large spans of grassland, river marshes, and markedly beautiful constellations and moon shots. Simon Stone stands out for his directing style; crafting a film of so much love and wonder; it encompasses the pre-war feel, whilst leaving a lot of room for the appreciation of Sussex and the process of archaeology.

Although there seemed some oddly placed romantic tension, when the full cast all join, the film becomes captivating. The dynamics of the experts versus the supposed amateurs, Edith’s passion for a topic alien to her and Brown’s loyalty to the craft curates an engaging and wholesome period drama. James and Flynn give compelling performances, even as secondary characters, along with a particularly powerful outburst from Archie Barnes, playing Mulligan’s son – Robert Pretty.

The acting feels real, and even Stuart Piggott (played by Ben Chaplin), offers a unique perspective into the reality of the social issues facing an individual in the 30s. Charlie Philips (played by Ken Stott) takes on the role of the gatekeeper of archaeology, stopping the supposed amateurs from corrupting the site. Mulligan and Fiennes’ compliment this in their attempt to share the discoveries. These juxtapositions prove exciting, without losing the slow, methodological process of the excavation, so as not to overwhelm the story. Basil Brown is memorialised in this film, along with Edith Pretty, who were scraped from the historical record; these performances do their legacy enough justice.

Interestingly, Mulligan’s role was first in Nicole Kidman’s hands. Despite this her performance shines. The close bond between mother and son cements Mulligan as a maternal, ever-present figure, even when she remains a bystander. However, the problems of having a 36-year-old actress playing 56-year-old real women is an ever-present problem in Hollywood. Women are consistently held to higher beauty standards, being played by younger actresses. Nonetheless, Mulligan gives a compelling portrayal, despite this problem making it harder to understand Edith’s journey.

Set in the countryside, with majority of the film on one estate, with a small cast, it manages to encapsulate the wider landscape in a way that builds the characters, subtly commenting on the negatives of war, complex romantic relationships, and the dynamic of ownership within Britain. It manages to curate a film that feels intimate, yet crafts Brown as an almost ambiguous figure, one who’s sole purpose lies in his love for archaeology. Perhaps this single-mindedness is exactly why we sympathise with Brown’s lack of recognition illuminated in the ending credits.

Ironically, argument brokers over who the artefacts belong to: Ipswich or the British Museum? Edith in a statement of generosity donates them to the British Museum, despite parts of the film surrounding this conflict. The choice in her decision and the tension over ownership speaks to broader conflicts in archaeology. As well as the stolen artefacts which are still held in the treasured British Museum, despite these exact requests being demonstrated abroad to garner the chance at displaying their own history. For once, the British Museum acquired permission for the treasures they gained and currently display. However, the consistent, oppressive figure of Philips, whose interests lie with the British Museum, makes the result seems all too convenient – although truthful. Nevertheless, it proved the amateurs’ point, that history shouldn’t be gatekept and alienated to the vastly educated.

A cinematic and moving piece, about romance, two periods of history coinciding (the Anglo-Saxon and the 30s in Sussex), friendship and family. It speaks to sexism, the inherent homophobia within society, classism, with a slight anti-war message – or at least a dread for the indiscriminate death. All these are subtle and embedded artfully into a wider story on one the greatest burial hoards found in the UK.

The Dig is currently streaming on Netflix.