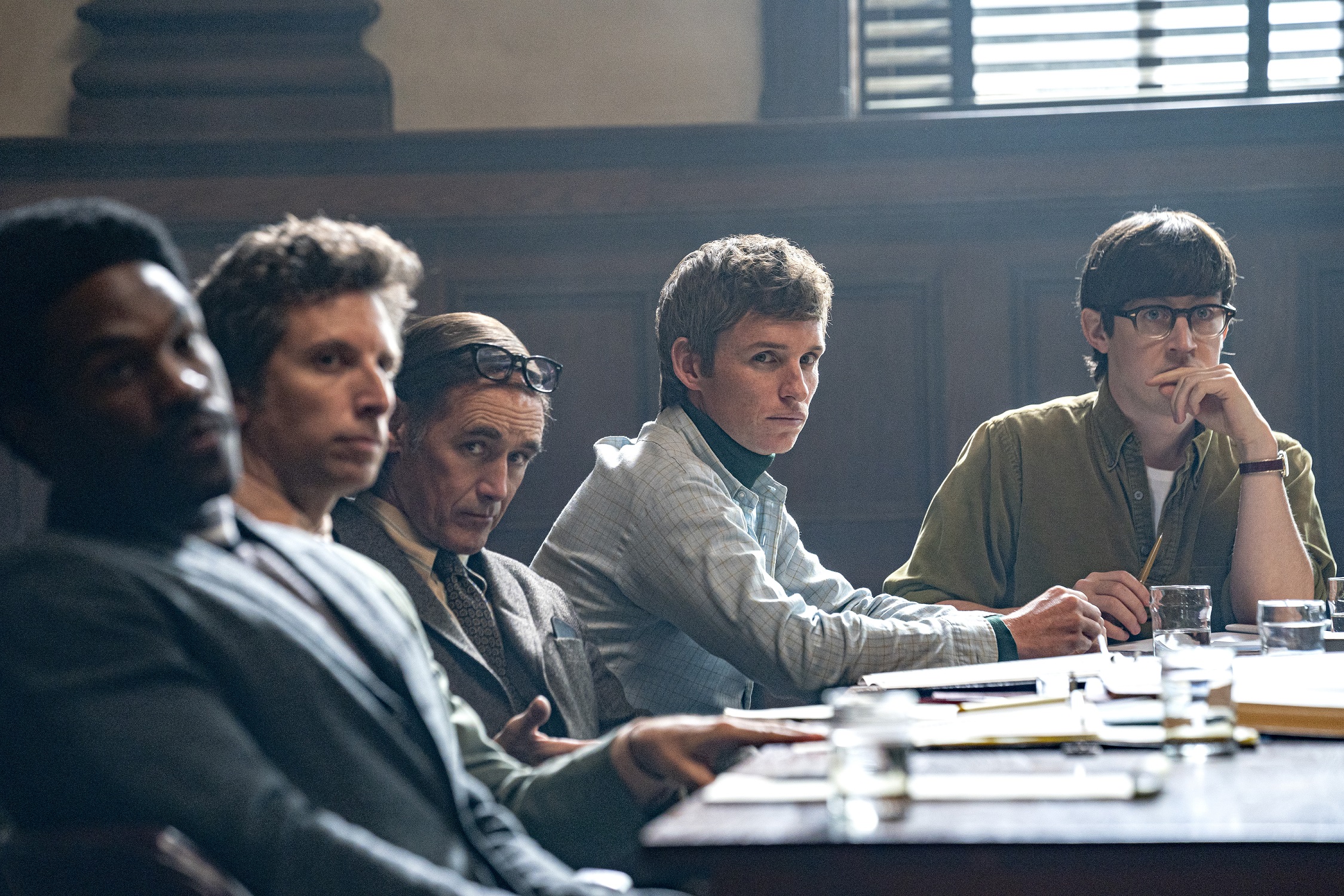 Film Editor Rhys Lloyd-Jones takes a look at The Trial of the Chicago 7, a film made with brilliance and skill, yet with a worrying emptiness in meaning and message

For better or for worse, The Trial of the Chicago 7 is undeniably an Aaron Sorkin film. The writer behind The Social Network and A Few Good Men returns to the directors chair to helm Netflix’s latest stab at award season gold. Sorkin has a notable, distinct flavour to his dialogue, a mix of wry, smug humour masking politically charged anger. This brand of tone is often wrapped neatly in powerhouse monologues or blistering courtroom scenes, where the insults are barbed and the finale is rousing. In The Trial of the Chicago 7, a politically charged courtroom drama, Sorkin returns comfortably to where he shines, even if this style is a little predictable by now. Telling the story of the real Chicago 7, a group of activists who were arrested under the charge of inciting riots during the 1968 Democratic National Convention, Sorkin and his ensemble cast utilise an example of injustice within a supposedly democratic nation for a scathing look at the American justice system, that mirrors then and now with uncomfortable similarity. Yet for all its pomposity and indignation, this is a film, layered with a veneer of cinematic brilliance, with very little else to bring to a vital, escalating debate.

After the 1968 DNC riots, seven protestors, each opposing the Vietnam War and the Democratic party nomination of Hubert Humphrey, were arrested and put on trial for alleging conspiring to incite violence. The accused ranged from the chairman of the Black Panthers, Bobby Seale, to ‘New Left’ agitators Abbie Hoffman and Jerry Rubin, and to Anti-War activists such as Thomas Hayden. The trial was notably infamous for the open hostility that the Judge showed the accused and the defence legal team, charging each of them with contempt of court on multiple counts. The divide between protesters and police brutality, as well as the lengths that the American state system will go to ridicule or harass activists, is sadly not a dynamic that has been consigned to history.

In 2020, during the Black Lives Matter demonstrations and the surrounding condemnation of police brutality, The Trial of the Chicago 7 is unnervingly relevant, which is perhaps what becomes so frustrating about the film. The film is not concerned with activism, nor is it relevant beyond anything but coincidence. It is a historical biopic that seems to have capitalised on systemic injustice as timely marketing. Sorkin never dares go much further into the roots of protest or the reality of a policed state than a well shot flashback or monologue. However, in credit to Sorkin, this is not a remotely patriotic affair. Unlike a A Few Good Men, Sorkin doesn’t drape the courtroom in American flags, nor does he revel in the beauty of the American dream. Sorkin instead finds the heroism and beauty, not in the state, but in individuals and character. He is a master of characterisation, despite the large ensemble he has to work with. Wherever the film may falter, there is a respectful and matured understanding that whilst America may be compromised, not of all its people are.

From a technical standpoint, Sorkin has grown into as much a skilled director as he is a writer. Scenes within the courtroom are muted and fogged with a murky sense of judgement, a bleakness that only dissipates when rays of light fall through the window, onto the men lining the defence table. Outside the courtroom, Sorkin finds his real flair. During the flashbacks to the riots that ensued, Sorkin intercuts the scene with real black and white footage from the actual event. This is an effective way of heightening the sense of dread and agitation, exacerbated by the sickeningly tense, heart-racing score by Daniel Pemberton. These are fantastic sequences, spliced with brilliant performances that narrate the horrendous violence that Sorkin doesn’t pull away from. In these moments, or when Sorkin plays around with the multiple perspectives and conflicting testimony of the characters, is where The Trial of the Chicago 7 is one of the year’s most memorable and effective pieces of cinema. This contradiction between cinematic grace and frustratingly safe filmmaking is where the film becomes difficult to appraise.

However, where the film can not be faulted comes from its performances. Boasting an array of surprising turns and trusted thespians, The Trial of the Chicago 7 is an acting powerhouse. Jeremy Strong, playing Jerry Rubin, embodies an affable hippie with apt comedic timing, though with enough bathos to tinge him with sadness and tragedy. Joseph Gordon-Levitt, a criminally underrated actor, is somewhat wasted as Richard Schultz, the prosecution attorney, who is relegated to a somewhat thankless task of monotone exposition. However, Levitt manages to inject enough quiet dignity and pride to humanise the character and make him work. Eddie Redmayne as Thomas Hayden is an effective moral centre of the film, balancing the abrasive extremes of state and anarchy. Redmayne trades his usual tendency to play every character with a degree of social ineptitude with a more collected, self-assured charm and stoicism. Despite these impressive performances, it is these three stand out cast members that pull off their performances with herculean talent; Mark Rylance, Yahya Abdul-Mateen II and Sacha Baron Cohen.

As perhaps the most accomplished actor within the cast, Rylance is unsurprisingly on top form. As the defence lawyer, William Kunstler, Rylance bubbles away with barely concealed anger and frustration, as Kunstler desperately tries to keep his calm. This ticking bomb of emotion layers Rylance with complex beats that the actor clearly revels in. Yahya Abdul-Mateen II, as Bobbly Seale, drives the film closer to contemporary commentary than Sorkin does ,with a indomitable performance. Abdul-Mateen holds his performance with a ferocity and intensity that culminates in the most shocking moment of the film, in which Bobby Seale, the Black Panther, is bound and gagged in an American courtroom. Even without this voice, Abdul-Mateen conveys enough emotion in his eyes and laboured breathing to propel the film forward. The most unexpected turn comes from British satirist, Sacha Baron Cohen, known for his alter-egos Borat and Ali G, neither renowned for their subtlety. Baron Cohen portrays Abie Hoffman, a brash, impassioned protester who is utilised as both comic relief and in some of the more touching moments of the film. Cohen narrates great portions of the film, as Hoffman regales the events of the film to a crowded bar, recounting it in the same way a stand-up comedian would. Baron Cohen, in both moments of humour and anger, grace and pain, is exceptional, proving his worth as a talented, serious actor of note.

Despite the cliched form, the film cements itself as a brilliantly performed biopic, up until the staggering misfire of the finale. Sorkin wraps the film up with a neat bow, in which Tom Hayden reads aloud the names of soldiers who lost their lives in Vietnam, whilst the court claps and cheers, and the villains scowl and are humiliated. This ending, a supposed celebration of justice and activism, is frankly insulting. Sorkin has no right to treat this as a conclusion, as though American soldiers are not still killed in other wars fought almost exclusively for profit, or as though police brutality was defeated by Eddie Redmayne and his dulcet voice. This is a childish, infuriating conclusion, aimed to delight and please academy voters, without having the bravery, or decency, to explore these crucial themes beyond speeches or smarmy dialogue. Sorkin seems to be so set on clapping himself on the back, he halts the film before he could make any sense of its meaning or impact.

The Trial of the Chicago 7 deserves to be lauded for its performances and accomplished use of perspective and dialogue to tell a story. Sorkin has structured a complicated ensemble piece masterfully, and continues to write with flair and deft characterisation. However, it is a worrying, uncomfortable reality that large studios have found a way to capitalise on activism and socio-political movements as real-time marketing. Exposure and recognition of injustice is vital, yet a faux-understanding of a real-world issues is a harmful, infantile examination. To wrap things up with a neat ending, to paint the world in broad brush strokes is a misstep that neglects the truth of the situation; Wars are still fought for the highest bidder, racial profiling is still as prevalent today and the American justice system is systemically flawed. To profit on these facts, without addressing them in a meaningful way, is a trend that does not bode well. As a film, The Trial of the Chicago 7 is a brilliant piece. As a release, The Trial of the Chicago 7 is a indicator of a worrying future.

The Trial of the Chicago 7 is now streaming on Netflix.

Keeping up to date on the latest movies? Here are the latest reviews from Redbrick Film: