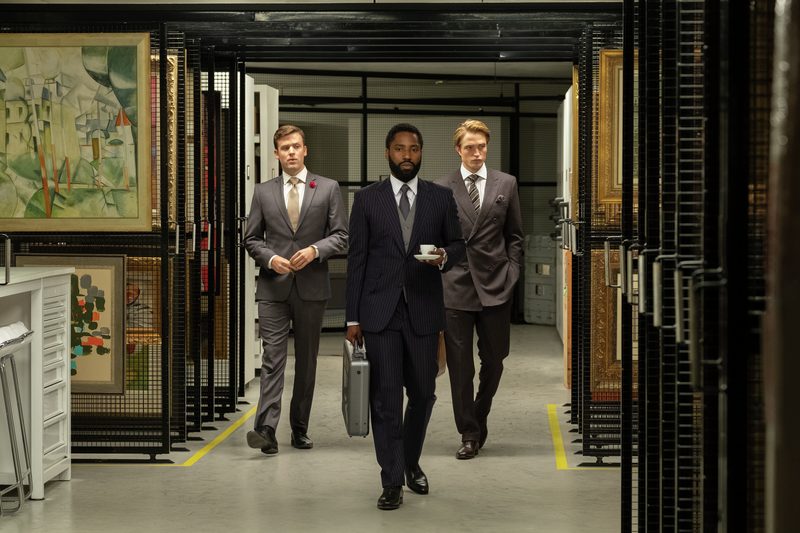 Christopher Nolan’s long awaited time-blending thriller has had a rocky road to release. Already an eagerly anticipated summer blockbuster, Tenet, starring John David Washington and Robert Pattinson, has become somewhat of a beacon for the cinema experience. Amid the delays and upset caused by the COVID-19 pandemic, Nolan has staunchly remained committed to a summer theatrical premiere, whilst other studios have pulled their major money makers to much safer release dates. With this pandemic pressure resting on its shoulders, as well as the added hype surrounding the ‘Nolan’ brand, Tenet seemingly has an insurmountable standard to deliver to filmgoers worldwide. Nolan has built himself a solid base of loyal fans thanks to his stellar work on The Dark Knight Trilogy as well as his trademark, high concept popcorn flicks such as Inception, Interstellar and The Prestige. His films are visually breathtaking, though have been criticised for a lack of dimension in his characters. So where does Tenet, his stylish spy thriller, fit in this impressive, iconic filmography?

In short, it fits in quite nicely. Tenet is a satisfying, gorgeous riff on the flashy elements of Bond, with the added Nolan twist, a squeeze of theoretical physics bending the laws of time. As mind benders go, Tenet is less of a head-scratcher than some of Nolan’s previous films, though the sci-fi jargon will often leave some of the exposition feeling rather bloated. The opening concept is fairly simple; John David Washington, known as The Protagonist, is recruited by a secret agency operating outside of national interest. Washington is put on a case tracking mysterious bullets that seem to be travelling backwards in time, due to ‘time inversion.’ This leads him across the globe, into the jaws of a Russian arms dealer, Andrei Sato, played by thespian Kenneth Branagh in the style of a hammy Bond villain. Nolan clearly adores the pure theatricality of Bond, mirroring the suave suits, stunning vistas and the stoic leading man.

Whilst John David Washington isn’t given much for his charismatic acting chops, he carries The Protagonist with charm, cheekiness and a heroic stature that cements the film’s narrative together. His action sequence competence and calm yet tough exterior makes for a very convincing Bond audition in fact. Elizabeth Debicki is  given somewhat more to work with, as the tormented wife of Sato, Kat, whose pain and fear manifests itself over the film into more active, violent rage. Kat is given more agency than most of Nolan’s female characters, and whilst Debicki is a performer with skill and conviction, she is still relegated to a damsel in distress for the first half of the film. Out of the cast, the show is stolen by Robert Pattison and Kenneth Branagh. Pattison plays Neil, a handler working for the intelligence agency, an enigmatic man who clearly knows more than he lets on. Pattison imbues this normally thankless role with warmth and likability, grinning and rubbing his hands with glee at the prospect of large, dramatic explosions. This slightly manic splash to the character that Pattison provides works well in contrast with the professional demeanour of The Protagonist. Branagh, on the other hand, is genuinely unnerving as the sadistic arms dealer, pulsating with venom and exuding sadness in each scene. Where Nolan sets this character apart from an empty, shrieking villain is with an undeniably pathetic nature. Sato is unloved by his wife, unsure how to connect with his son, and conscious of his ageing heartbeat. Branagh uses this weaker side of the character by choking it into barely controlled anger at the world.

From the beginning, Tenet delves directly into the high stakes of the apocalypse, with punchy, pulpy action, masked by messy, violent effect noise. Each gunshot in Tenet seems to reverberate through your bones. This isn’t always a positive however. A lot of the audio in the film is poorly mixed, often clouding important dialogue scenes. This quickly becomes frustrating and distracting. Conversely, the intentional intensity is heightened by an absolutely incredible soundtrack by Ludwig Goransson, which swells with a sinister, pulse-raising bassline, underscoring the film with dread and nail-biting tension. Even with the lack of his usual music maestro Hans Zimmer, this is the most exceptional score to a Christopher Nolan film.

Nolan himself is on top form behind the camera as well. Utilising the finest technology in the industry, Nolan fills with the screen with crisp, clean imagery which incorporates naturalistic elements into surrealist imagery with effortless skill. Things such as fog, rain, or poor lighting are used to great effect in a handful of shots, whilst key moments are often marked with colour changes, from a soft purple tinge to a violent red, depending on the tone of the scene. This is Nolan at his most stylised, yet the spectacle is smaller than Inception or Interstellar. Instead of blackholes or curving streets, Tenet uses smaller set pieces to great advantage. With the time inversion benefit, a spectacle such as a car spinning out of control and rolling over is played both forwards and backwards in time, so each reversed detail of debris and rubble is as stunning as a multi-storey explosion. This is where the action in Tenet also shines. Whilst the fight scenes at first glance are no more than a well choreographed fist fight similar to any spy film, once reversed, the action becomes something more like a dance between mirrored motions, something as mesmerising as it is exciting.

At first, Tenet may seem almost nonsensical, yet, as with most Nolan films, once the third act kicks in, your mouth curves into a grin as you realise that there was a method to this madness all along. Once everything kicks into place by the end, full of twists and turns, Tenet is a wholly satisfying addition to the Nolan canon. Is it the messiah of cinema as it may have been hyped up to be? No, it is simply a well made spy film with a cool gimmick and nice visuals. Worth risking your life to go see in a cinema? If the COVID rates near you are high, not at all, wait and catch the film at home. But Tenet, with the wide-eye spectacle and bombastic score, is a welcome reminder that the cinematic experience is essential to the power and impact of the movies.

Nolan hasn’t let himself down with this one, and whilst it doesn’t hit the emotional beats of his last outing, Dunkirk, he continues to cement himself as the pioneer of the arthouse blockbuster, a mix of pure, fun escapism made with the upmost care and precision.  Flashy, stylish and a hell of a good time, Tenet has been worth the wait.

Tenet is in cinemas now.

Need more some reviews to satisfy your film needs? Check out the latest reviews from Redbrick Film: