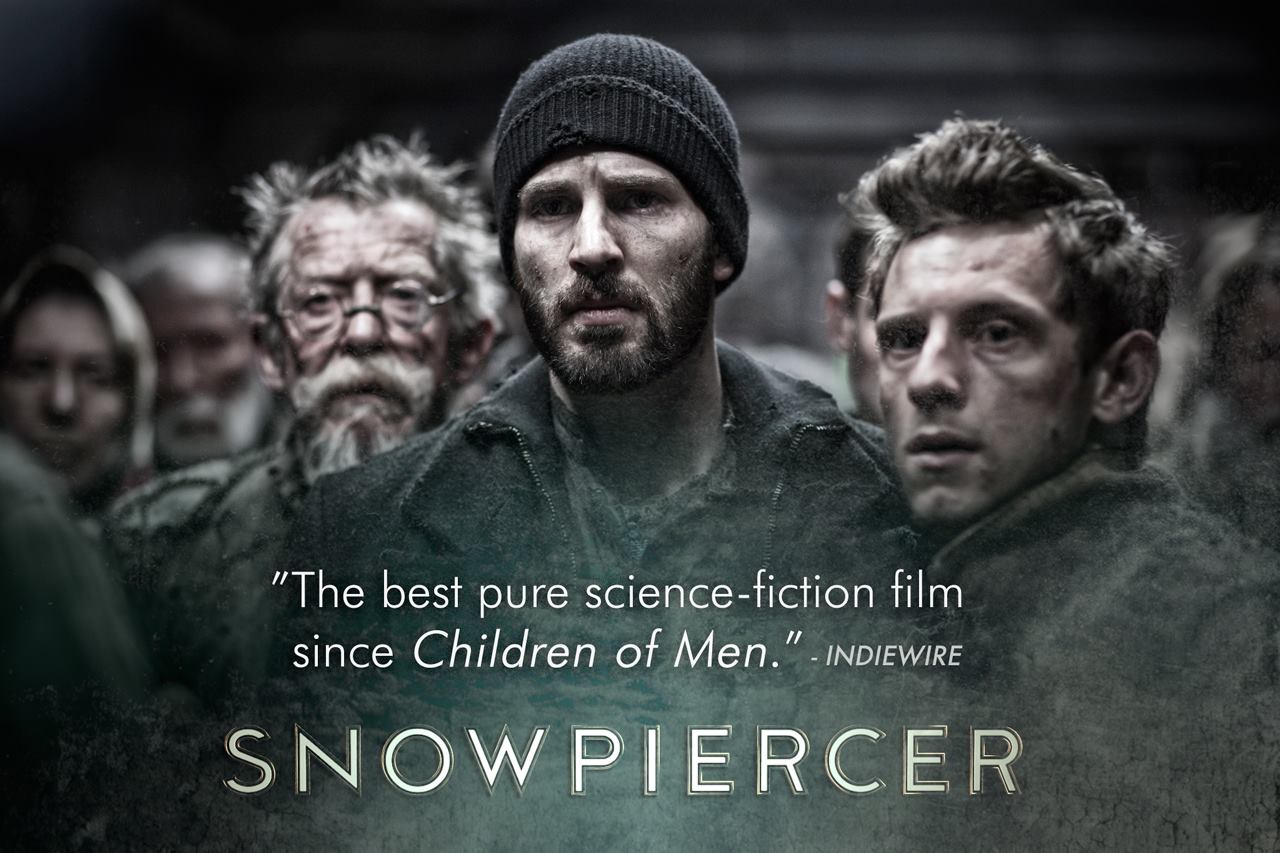 Before there was Parasite, there was Snowpiercer – and Film Editor Matt Taylor finds Bong Joon Ho’s tale of class warfare to be more relevant than ever

Matt Taylor
Third year English student and Film Editor with the capacity to geek
Published at 14:30 on 6 June 2020
Images by Snowpiercer

‘Wow, that movie really hates rich people.’ That was the first thing my friend said to me after the credits rolled on Parasite at the end of January – though we laughed at the time (admittedly partly to alleviate the tension of the movie itself), his words stuck in my head as the simplest way of summing up the point of Parasite. They also got me thinking about other movies – particularly Snowpiercer, an earlier directorial effort from Bong Joon Ho. This is a movie that ultimately never got the attention it deserved (thanks to a butchered release by a producer so vile he shall go unnamed here), but is just as impactful as its Oscar-winning sister film. And now, in 2020, as the world spirals into chaos thanks to the incompetencies of both US and UK governments, botched responses to a global pandemic, and people the world over having had enough of police brutality and systemic racism, Snowpiercer may not make for the most comfortable viewing – but it is more relevant than it has ever been.

The 2013 movie is based loosely on a series of French graphic novels from the 1980s, titled Le Transperceneige, and carries an admittedly outlandish premise: in an attempt to reverse the effects of global warming, governments of the world shoot missiles of coldness (bear with me here) into the atmosphere to cool it down. Predictably their efforts fail, and the world is suddenly plunged into a new ice age. The only surviving remnants of humanity are on board a train (the titular Snowpiercer), separated into front and tail sections based on their ‘preordained’ status and position (hooray for capitalism) – but 17 years in and the residents of the tail section have had enough: it’s time to move to the front. Where the graphic novel is a cautionary tale about ecological disaster, Bong shifts the focus of his film adaptation and turns it into a tale of class warfare and revolution, allowing him to take down capitalism all guns blazing – quite literally.

That it’s a story of revolution is what lends Snowpiercer its timelessness. You need look no further than Bong’s previous three films (Snowpiercer, Parasite, and Netflix’s Okja) to see that he has always been keenly interested in tales of class. Snowpiercer is the first in this spiritual trilogy, and is easily the most aggressive of the three – though the latter two are perhaps smarter or more delicate in their critiques of capitalism, Snowpiercer’s greatest strength is that it simply goes for it, and goes in hard. The very nature of the train and the way the audience moves through it (always from left to right) is a simple-yet-effective way of portraying the class lines that are drawn in capitalist society, while also calling to mind other such tales as High Rise in its layout. There is no metaphor here: everything in the film is as it is in the world today, just displaced into a dystopia that makes the issues easier to acknowledge. Where the residents of the tail section are cramped and dirty, the passengers of the front have carriage after carriage of space, ranging from nightclubs to drug dens. Where the tail is left to eat so-called ‘protein blocks’ (the actual ingredients of which are less than desirable, to say the least), the front has swathes of meat and fish at its disposal. If someone in the front wants a violinist to play for them, they simply take one from the tail. And when someone from the tail tries to take a stand, they are punished. Sound familiar?

It is also worth saying that, although none of this commentary is racially coded (with the exception of nearly all of the front passengers being white), it is very easy to read that coding into it – particularly as Bong has a way of assigning a universality to his movies, regardless of their setting. That universality is what gives Snowpiercer its relevance; particularly with the ongoing #BlackLivesMatter protests around the globe, it is hard not to see their struggle in the struggle of the tail sectioners. This is a film that is vehemently anti-capitalist, anti-prejudice, and firmly against just about any other societal problem you can think of – and it is proud to be so.

All that substance would be tricky to swallow were it not for some style – style that Snowpiercer has in bucketloads. Both the look and feel of the film are incredible, thanks to some stunning camerawork courtesy of Hong Kung Pyo and the beautiful production design used to bring the train to life. Hong’s camera is wonderfully fluid, alternating between some fantastic moments of shaky-cam and more restrained dolly movements with ease, always making sure the audience knows exactly where they are in the carnage. The train itself is a thing of perverse beauty: every section feels unique and brilliantly realised, moving from the ­Children of Men-esque slums of the rear to the front few carriages reminiscent of the unsettling cleanliness of the Park house in Parasite. The two work in perfect tandem to create a dystopic world never anything less than terrifying, but Hong’s camera keeps pushing us forward as we follow our protagonists to the front. I mean this literally: Hong shoots much of the action from the right hand side of the train, meaning that when characters move forwards they move from the left side of the frame to the right – this momentum never lets up for the entire movie, and serves to physically keep the audience going. There’s also Marco Beltrami’s excellent score, which, although it may not have any particularly memorable pieces, ups the intensity when it needs to, and drops back beautifully when silence will do the trick. Combine all of this with Bong’s exquisite direction, and everything behind the camera of Snowpiercer is just about perfect.

The same could very much be said about everything in front of the camera. I’m struggling to think of any other movies where an ensemble cast works so beautifully together for the entirety of the film (Knives Out and Ready or Not are the only two that spring to mind). At the head is a magnificent Chris Evans giving an incredibly restrained turn as Curtis Everett, unwitting leader of the rebellion. Curtis doesn’t want to lead the people, but has no choice: Evans is visibly simmering with rage for much of the movie but rarely lets it show (watch out for the few times Curtis swears and the weight that his words carry in those moments) until right at the end, where Evans delivers a beautiful monologue that’ll have you holding back tears. By his side are plenty of other capable actors: regular Bong collaborator Song Kang Ho (amazingly grabbing second billing) is here as Namgoong Minsoo, a security expert who the rebels need if they’re to stand any chance of moving forwards, but also a kronole addict (a hallucinogenic drug made from industrial waste). There’s Tilda Swinton as Mason, the representative of the front who the tail sectioners have to deal with, but who herself doesn’t quite belong; her Northern accent is part of this, but Mason commonly wants to shirk responsibility for any of the action taken against the tail sectioners.

Jamie Bell is an excellent presence as Edgar, Curtis’ protégé who’s only ever known life on the train and desperately wants to change it. Octavia Spencer is on superb supporting form as Tanya, whose involvement in the revolt is cemented when her son is taken to the front. The late, great John Hurt is oddly calming in his role as Gilliam, the actual leader of the rebellion, but age and weariness are holding him back – a fact he is all too aware of. Ko Asung is fantastically engaging as Yona, Namgoong’s daughter who’s also a train baby, like Edgar, and is forced way outside her comfort zone when she’s roped into the rebellion by her father. And then there’s Ed Harris. The Man in Black himself here plays the God-like figure of Wilford, the man behind the train. Detested by the tail sectioners, yet worshipped by the front passengers like a deity (keep an eye out for an excellent Alison Pill, whose primary school teacher is the very definition of a ‘Karen’), Wilford is simply a man with too much power. As an ensemble piece of casting, it rarely gets better than this.

The end result of all this is an unapologetically aggressive film. Where Okja and Parasite disguise their societal critiques with satire and comedy, Snowpiercer takes no prisoners, and hacks away at its shell of a capitalist society with more knives, axes, spears, and bullets than most directors would know what to do with – but in Bong’s hands, everything feels safe, deliberate, precise. Its action scenes are beautifully lit, shot, and executed (being mostly practical stuntwork), but underneath all the blood, all the carnage, all the suffering, lies an innately relatable story of humanity. As Bong himself has said, ‘we all live in the same country – called Capitalism’ – this is a fact that Snowpiercer tackles head-on, and by the time the credits roll you’ll be staggered at what you’ve just witnessed. Sure, the premise is mad as hell, but who cares? Snowpiercer is a masterclass in weaving science-fiction with political commentary, and it is more relevant now than it ever has been.

Though he would later go on to outdo himself with Parasite, there’s no denying the brilliance of Bong’s first English-language film. At once bristling with rage and overflowing with empathy, Snowpiercer is a unique, engaging work that demands to be seen by as many as possible. With a timeless set of politics that we can all get behind in such dire moments as the ones we are living through currently, this is a film I know I will be revisiting for years to come.

Snowpiercer is available now on DVD and Blu-ray.

In need of some bonkers movie thrills to get you through life in lockdown? Check out these other articles on Redbrick Film: